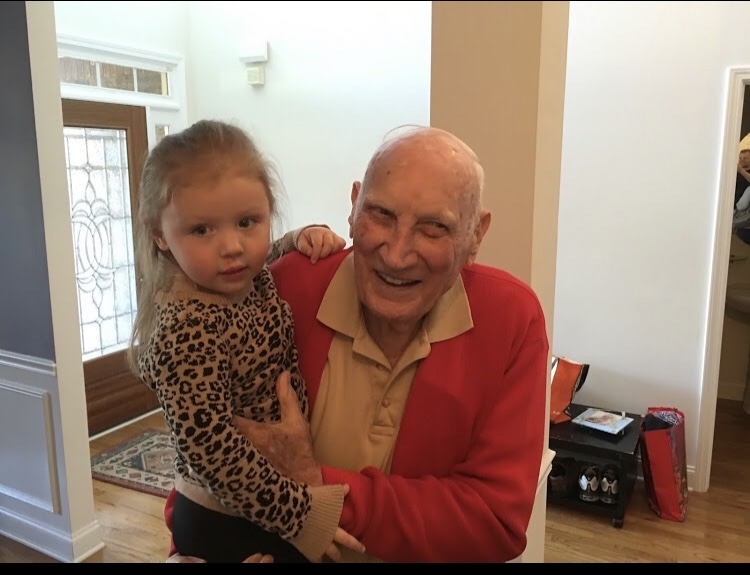 Arbelia (RB or Junior or PawPaw) Sosebee, Jr., 94+, “went home” Thursday evening, 1-3-19 after a long year of declining health. He was surrounded by family members while others prayed for him for this last journey. RB was preceded in death by his bride of 68+ years, Agnes Duncan Sosebee (2013), his parents Arbelia Sosebee Sr (1968), Mary Agusta Bell Sosebee (1977), his daughter Vicki Sosebee Ward Stewart (2018) as well as two sisters, Ruth Sosebee Wyatt (1987), Pauline Sosebee Hyatt (1988) and three brothers, James (Jim) Wilson Sosebee (2011), Louie Sosebee (1997) and Daniel (Ray) Sosebee (2014). All the siblings were married, most over 50 years with enough “first cousins” to fill a house, 15 in all, two deceased. Surviving RB is his son Terry A Sosebee, wife Lynn H Sosebee, children Jenna Sosebee Hymer& husband Dalewith two children Aiden and Ava, as well as Josh Sosebee & wife Carla with one child Finn and one on the way. Daughter Joanne Sosebee Rissanen& husband Russ with two children Rachael and Daniel. Granddaughter Robin Ward Ovens& husband Rob with daughter Sophia.Also surviving is RBswife’s sister & husband, Katherine & Inman McElvy of Florida as well as their three children and grandchildren. RB served in the Navy from mid-1946 to early 1948 after finding and marrying his bride in October 1944. He was stationed on the USS Yellowstone, a Destroyer tender, where he learned to “stick” weld repairing holes in the other ships where torpedoes had struck. The art of welding would carry him through life working at several manufacturing facilities, the last one being Scientific Atlanta, from mid-1965 to mid-1986. There he started out as a welder and moved up to Supervisor of the Weld Shop and Rough-Cut Shop. RB loved the time he worked for Scientific Atlanta as it was the first, if not the only shop that had an air-conditioned weld shop. After marrying Agnes Lena Duncan in October 1944, leaving the Navy, they settled in the East Point area along with their first child, Terry Alan Sosebee born in May of 1947. With the birth of their second child, Vicki Lynn Sosebee, born December 30, 1948 the first house was built, jobs taken and the family of four moved forward. Relocating to South West Atlanta around 1960 the family continued good times with all the other Sosebees, Hyatts and Wyatts. Family gatherings were always great times. In 1964 yet a third child, Joanne Sosebee, was born and became the “second family” as the first two left home seeking to find their way in life. The marrying of the three children brought great joy and yet a bigger family. The addition of grandkids was a pure delight and with great grand children the legacy was in place. RB always loved working with his hands and after retiring and his bride Agnes retiring, they relocated to Dacula, GA with a stop over in Norcross. In Dacula he had his shop where wood workings were routinely provided to his family and friends. RB was always being the good neighbor, seeking out those who needed assistance or had a neighborhood project going where his help was needed. The last five years, with the passing of Agnes, left him home where for the most part, he handled a lot of duties with the help of Joanne. His loving daughter Vicki, passing in 2018, after 10 years of fighting dementia and Alzheimer’s was an incredible blow to him and to the rest of the family. RB was a strong willed and never say die kind of guy. He was proud of what his family had blossomed into with five grandkids and now four great grandkids, and one “on the way”. We will surely miss this wonderful husband, father, grandfather, great-grandfather and friend. The world, especially his families, will be a little darker for some time to come. Condolences may be made through cards,flowers, or contributions to the church or charity of your choice in the name of Arbelia Sosebee Jr.