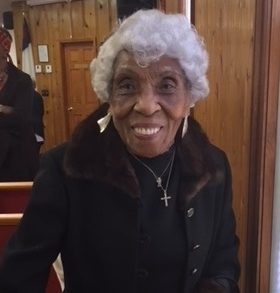 Reflections Carrie Coates Eason was born into this life on October 19, 1915 in Waxhaw, North Carolina to the marital union between John and Olivia Campbell. Both parents, her sisters Minnie Conner, Louise Brown, Allene Davis and brothers Andrew Campbell, James Campbell, John Campbell and Howard Campbell departed this life prior to her.  God answered her prayer and she transitioned peacefully in her sleep from this home to her eternal home on October 17, 2018. She obtained her education in the Mecklenburg County School System in Charlotte. North Carolina and after graduation she moved to Chicago Illinois where she obtained her degree and license as a Beautician.  Through hard work she became an entrepreneur by owning a Hair Salon.  She married Clyde Coates March 9, 1951 and they together owned a restaurant establishment and was blessed with a very successful life. They sold the businesses and retired back to Charlotte, North Carolina.  He predeceased her in 1976.  She later married John Eason a retired Army Veteran and Postal Worker July 5, 1981. He also predeceased her in January 1985. She was a member of St. Peter’s Catholic Church in Charlotte, North Carolina until she moved to Lawrenceville, Georgia and joined Tabernacle Baptist Church of Lawrenceville. It was well known that she loved to share her wisdom of life and love to all that knew her.  God was the center of her life and she always shared stories of how God blessed her throughout her many years.  Her love of life had a tremendous impact on many people.  Carrie was an inspiration to the family – she was understanding, caring, kind and a source of laughter that was contagious.  She was a mother figure to some, a friend to others, but most of all, she was a woman of strong faith and held to her Christian beliefs to the very end. Rejoicing in her new life are: Sisters Ruby Jordan of Charlotte, North Carolina and Clyde Sanders of Springfield, Massachusetts; Mansfield Coates (Sylvia) of Charlotte, North Carolina; Cheryl Reid-Drayton of Lawrenceville, Georgia and a host of five generations of nieces, nephews, cousins and very special friends.