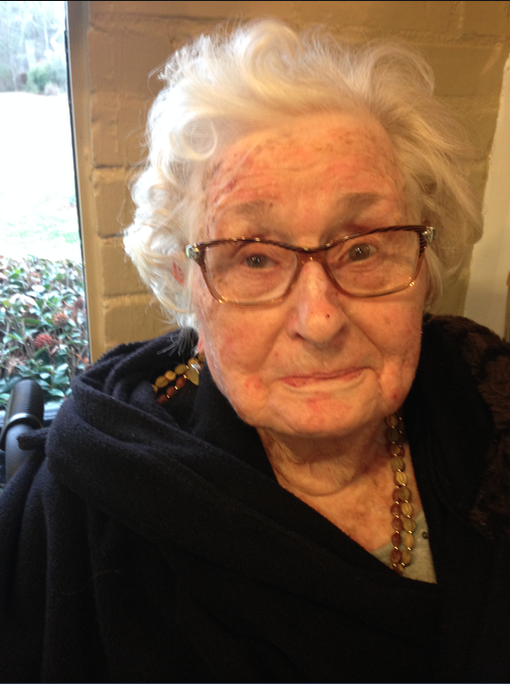 Erma Louise (Adkins) Miller of Stone Mountain, Georgia died on May 10, 2015. Erma was 91 years old. Her children, grandchildren, family and friends were by her side prior to her death. Erma is survived by her children, Susan Roof (Joseph) of Dawsonville, GA, Stephen Miller (Jayne) of Boulder, CO, Cynthia Ziegler of Stone Mountain, GA, and William Miller (Maxine) of Stone Mountain, GA; her six, grandchildren: Shannon Bulechek of Chesapeake, VA, Katherine Roof of Charlotte, NC, Joy Miller of Chicago, IL, Patrick Miller of Seattle WA, and David Ziegler and Anthony Ziegler of Stone Mountain, GA; her three great grandchildren: Jessica, Jennifer and Emily Bulechek of Chesapeake, VA; and her two step grandchildren Geoffrey and Aidan Longhurst of Boulder, CO. She is preceded in death by her husband, Col. William Miller of Stone Mountain, GA, and her son, David Miller of Sonoma, CA. Erma was born on June 5, 1923, on a farm in Huntington, WV, to Frank and Vera Adkins. In early 1943, at age 19, she joined the U.S. Navy, just after the Navy established the WAVES (“Women Accepted for Volunteer Emergency Service”). She served for the remainder of WWII as a flight dispatcher in Washington, DC until her discharge in 1945. While in Washington, she met Bill Miller while he was serving as a Marine fighter pilot. After their marriage in November of 1946, Erma followed Bill to his various Marine Corp postings through the end of the Korean War, finally settling in Atlanta where she and Bill began their family in earnest. Her surviving children remember her as a vibrant, loving and truly patient mother who was always supportive, protective and encouraging. Erma was an active and charter member of her parish, Holy Cross Catholic Church, for many years and was honored there as “Woman of the Year” in 2001. More recently she attended St. Stephen the Martyr Catholic Church closer to her home. She was an artist at heart but sacrificed pursuing her passion by raising five children and encouraging and fostering artistic, musical and culinary creativity in each of them. Erma was a loyal Republican but tolerated her mostly liberal Democratic children. She was a wonderful and talented cook, creatively melding the flavors of Appalachia and the South, always willing to teach and learn new recipes, and ever welcoming additional mouths to feed when her husband or children unexpectedly brought home friends – which was often. Her house was always open to friends and relatives and to the stray friends her children inevitably and often brought home. She loved all things Irish, the color green, “Oh Danny Boy” and “Country Roads”, and playing BINGO with friends at the American Legion Post. She was an active member of the Smokerise Garden Club as well as an avid volunteer in many other social organizations. She occasionally took a drink of scotch. Erma passed away peacefully at Cobblestone at Park Springs in Stone Mountain, GA after a long illness complicated by stroke. She’d spent almost 5 years at Cobblestone surrounded and taken care of day-to-day by her daughter Cynthia, and Cobblestone’s truly caring, dedicated and skilled staff, especially her primary caregivers, Marlene and Mariatu. Erma will be remembered and missed by family and friends and all who knew her. Visitation for Erma will be held on Thursday evening, May 14, 2015, from 7:00 to 8:30 p.m. at Wages & Sons Funeral Home in Stone Mountain and a funeral mass will be held at 10:30 a.m. on Friday, May 15, 2015, at St. Stephen the Martyr Catholic Church in Lilburn, GA, with interment to follow at Eternal Hills Cemetery in Snellville, GA. All are welcome to attend and celebrate Erma’s life. Condolences can be sent to Wages & Sons at 1040 Main Street, Stone Mountain, GA 30086. Donations in lieu of flowers can be made on Erma’s behalf to St. Stephen the Martyr Catholic Church or your favorite charity.