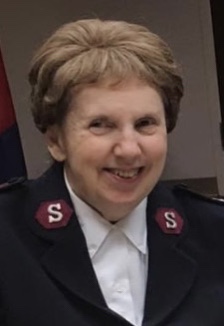 Major Evelyn Klaas Powell was Promoted To Glory on October 26, 2022, at the age of 83, following a lingering illness.

Evelyn Gwendolyn Klaas was born in Fort Lauderdale, Florida on October 13, 1939, to Colonels James and Ethel Klaas. Being a child of Salvation Army Officers, she was continually active in corps ministries such as open-air meetings, youth programs, corps cadets, songsters, League of Mercy, and the Home League.

While attending youth councils in Oklahoma City, she gave her heart to the Lord. Evelyn graduated from Grady High School in Atlanta, Georgia in 1957. She attended Asbury College and graduated with a Bachelor of Arts in Education in May 1962.

In 1967, she and Bill entered the Training College as members of the Evangelists Session of cadets. She stated in her candidate’s paper, “It is my desire to win others to Christ through living a consistent Christian life each day—to have patience, love, and understanding for those with whom I associate. I feel that the most valuable witness I can have is for others to know that Christ is very real in my life.”

Among many talents, Major Powell is remembered for lending her beautiful soprano voice to The Salvation Army’s women’s trio, “The Living Word.” In her later years of ministry, her compassion, sense of humor, and kindness were especially meaningful to the men they served in the Adult Rehabilitation Centers, whose lives she changed forever with her unconditional love and Christian witness.

Following an appointment as cadet-lieutenants to Norfolk, Virginia, the couple were commissioned on June 9, 1968. They would go on to serve faithfully as Salvation Army Officers for over 37 years, retiring on August 1, 2005.

She is survived by her sister-in-law, Brenda (Jim) Klaas; and seven nieces and nephews. A Celebration of Life is held at Westview Cemetery in Atlanta on November 3, 2022.