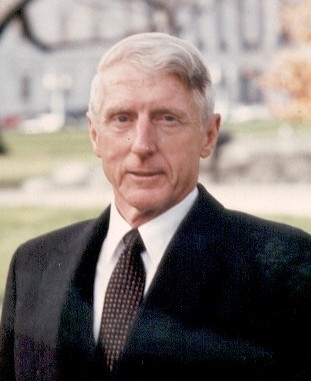 Ewell Brown Pinkston, 91, a decorated Korean War pilot and former leading executive in the corporate jet industry, died Sunday in Lawrenceville, Ga. Mr. Pinkston earned the Distinguished Flying Cross as a young Marine and later achieved the rank of colonel in the Marine Reserve. He retired from business in 1988 as the Executive Vice President for Government Sales in the Washington office of Savannah-based Gulfstream Aerospace. His wife of 67 years, Selina, died in 2011. They are survived by their five children. Born April 12, 1923, in the small South Georgia town of Parrott, Mr. Pinkston lived a life filled with great adventure, courage, spirituality, achievement, generosity and an unending love of family, faith and country. He graduated from Parrott High School, where he won four state tennis titles; Norman Junior College in Norman Park, Ga.; and Piedmont College in Demorest, Ga., where he played tennis, baseball and basketball and won the heart of his future wife, Selina Patterson from Toccoa, Ga. Brown arranged for his first meeting with Selina by seeing to it that there was only a single seat left open on the bus carrying both the men's and women's basketball teams on a road trip. In 1943, Brown and Selina were wed in a ceremony conducted by Selina's father, Methodist minister D.S. Patterson. A year later Brown enlisted in the Marine Corps and began a lifelong association with aviation, finishing No. 1 in his class of 354 at preflight training in Athens, Ga. In the Korean War, he flew Corsair fighter planes from the decks of small-scale carriers. He later distinguished himself as a senior officer, training pilots and flying everything from fighter jets to the Marine One helicopter, shuttling dignitaries to the White House lawn. In 1959 he left active military service and began his aviation industry career at Lockheed, in Marietta, Ga. While at Lockheed he attended night school and obtained a degree from Woodrow Wilson Law School in Atlanta. During his time at Lockheed, Mr. Pinkston accepted a year-long assignment to Christchurch, New Zealand, during which he made several trips to the South Pole on a project related to the company's C-130 cargo plane. During most of the 1960s, he was a sales manager for the new Lockheed Jetstar. In 1970, Mr. Pinkston took a similar marketing position with the Cessna Citation in Wichita, Kan., rolling out the company's first corporate jet. This brought him and his family from Sandy Springs, Ga., to Derby, Kan., where he lived from 1970 to 1976. In 1977 he moved to Savannah to join the company that would become Gulfstream Aeropspace. There he rose to become the firm's top Washington lobbyist and played a key role in obtaining Gulfstream's first government contracts. He had built relationships with Pentagon leaders and many members of Congress and the Senate, working particularly close with Georgia's U.S. Senators, Sam Nunn and Mack Mattingly. Following his retirement from Gulfstream in 1988, Brown and Selina retired first to Peachtree City, Ga., and then to Santa Rosa Beach, Fla., where Brown was a Board Member of the Santa Rosa Golf and Beach Golf. He resided since 2011 at the Bridge at Garden Plaza, an assistant living facility in Lawrenceville, Ga. A talented athlete throughout his life, Brown won state high school singles and doubles tennis championships two years in a row and played semi-professional baseball in the Georgia Florida League in the late 1940s. Tennis and golf remained lifelong passions, and he remained active well into his later years. A devout and spiritual man, Mr. Pinkston was a disciplined member and deacon of Baptist churches in every community where he lived. Brown was beloved by many for his devotion to family, both immediate and extended. Often was told the story of how Brown would take the family on a 50-mile detour to share a quick visit with a second cousin who might be in need, or an old acquaintance, just because it was "on the way." Brown generously welcomed relatives to live in his home for extended periods over the years, everyone from his mother-in-law to uncles, cousins, nephews and any other relations that might need a roof and a warm meal. Numerous were the friends and relatives who could count on Brown for help whenever it was needed and in whatever form it was required. Private about his charities, but generous, Mr. Pinkston tithed to his churches and established a trust fund that provided for the college educations of all his grandchildren. Brown cherished Graytona Lodge, the family vacation home that he, his parents and siblings built in 1956, in Grayton Beach, Fla. Throughout his life he continued to set an example of hard work and discipline. At age 74, while leading a family repair project, he fell off the roof of a dock, but emerged from the lake unscathed, only to smile for a picture, covered head to toe in spilled paint. He is survived by five children, Gail Brannin and her husband, Ralph; E.B. "Buddy" Pinkston Jr. and his wife, Gail; Pat Wiley and her husband, Don; Becky Pinkston Steele; Doug Pinkston and his wife, Laura Brown; sisters Ann Phillips and Dorothy Pinkston; 12 grandchildren and 11 great-grandchildren. The family will receive friends at Wages and Sons Funeral Service in Lawrenceville 6-8 p.m. Thursday. The funeral will be 1 p.m. Saturday at McLane Lakewood Funeral Home in Lake Park, Ga., followed by a graveside service at Lake Park Memorial Cemetery. The family will receive friends from noon to 1 p.m. at the funeral home. In lieu of flowers, the family requests that memorial donations be made to Habitat for Humanity.