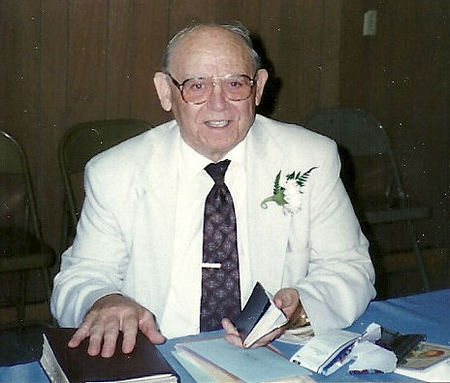 Rev. Somers Ralph Jones, Sr., born September 22, 1921, served the Lord and church families of Georgia for over 67 years. He was a long time pastor at several metro area churches and very active in the Georgia and Southern Baptist Associations. he was called to be with Our Lord, peacefully on June 25, 2010, at the age of 88. Rev. Jones was licensed to preach at Decatur Heights Baptist Church in 1943. He became pastor of Flint River Baptist Church in 1944 and thus began his nearly 7 decades of guiding congregations throughout Georgia. His ministry included Fellowship Baptist Church in Brunswick, Memorial Drive Baptist Church and Bethel Baptist Church both in Stone Mountain. Twice he served as pastor of Southside Baptist Church in College Park now located in Fayetteville, first for 16 years and then returned in 1977. He was named pastor emeritus in 1997 and continued to serve in that capacity to present. Rev. Jones was born in Stone Mountain, GA and attended Stone Mountain High School, lettering in basketball. He also excelled as a Golden Gloves boxer. Early in his career he was employed by Whitman Linen Company in addition to his pastoral duties. Rev. Jones is preceded in death by his wife of 61 years Leona Jones, and 3 of their 4 children, S. Ralph Jones, Jr., David W. Jones, Sr., and Naomi Jones Rodgers. He is survived by his daughter, Beverly and her husband Tommy Croy. Other survivors include sisters, Betty Turner and Gladys Campbell; Sister-in-Law, Gwen Flynn; Daughter-in-Laws, Bobbie Smith and Judy Jones; 9 grandchildren, 14 great grandchildren, 1 great great grandchild and many nieces and nephews. Flowers accepted or memorial donations may be sent to Sacred Journey Hospice, 138 Peach Dr, McDonough, GA 30253 or Southside Baptist Church, 1332 Hwy 92 South, Fayetteville, GA 30215.