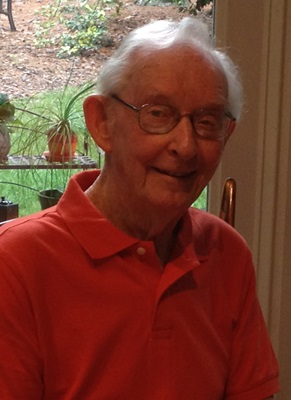 Raymond B. Smith, age 86, of Lawrenceville, GA passed away on Tuesday, October 20, 2015. He is preceded by his wife, Caroline K. Smith. Raymond is survived by his daughter, Donna Bozeman and husband, Barry; son, Brad Smith and wife, Tammi. He is also survived by his grandchildren, Hayden Smith, Jacob Bozeman, and Jeremy Bozeman. Raymond served in the United States Navy during the Korean War, and was a retired adjuster with Alexander Underwriters.  A funeral service will be held on Saturday, October 24, 2015 at 2:00 P.M. at Wages and Sons Gwinnett Chapel with military honors. The family will receive friends from 12:00 P.M. to 2:00 P.M. at Wages and Sons Gwinnett Chapel, 1031 Lawrenceville, Hwy., Lawrenceville, GA. 770-277-4550. In lieu of flowers, donations may be made in memory of Raymond to American Lung Association or Wounded Warrior Project. Online condolences can be expressed at www.wagesandsons.com