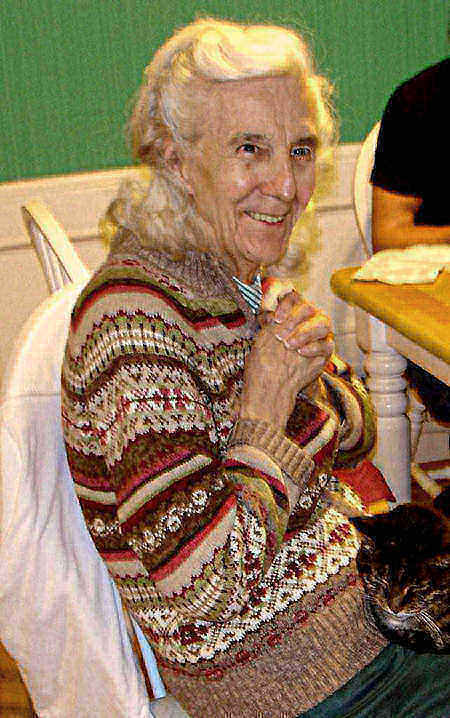 Maud Louise Wallser Tyler August 18, 1927 ~ November 27, 2012 On November 27, 2012. Maud has passed from this world to be with our Lord, Jesus Christ. Maud was born and raised in Cambridge, England where she met her husband-to-be, Robert Christie Tyler, "Bob", during world War 11. He was a pilot and was based near her homein England. They did not get married during the war, but waited until after the war when Maud came over to America. They were married on Long Island, New York by Bob's father, Dr. Robert Z. Tyler. Maud and Bob moved to Decatur, Georgia, in early 1952, where they raised their three children, Carolyn, Margaret, and Robert. Upon the death of her husband in 1968, Maud went to work as a bookkeeper for several small companies including Erickson Products and then secured a position at Dekalb Community College in the Administration and Admissions office where she worked for many years. Just before her retirement, she went to work at Avondale High School as the school secretary. Maud joined Belvedere United Methodist Church in 1952 and over the years she held many lay leadership positions in the Administrative Board and Council on Ministries. She was a memberof the North Georgia Conference of United Methodist Women, where she served in many positions including District President - Atlanta Decatur Oxford, Social Action Coordinator, Parliamentarian, Education & Interpretation Coordinator, and the Membership - Nurture & Outreach Coordinator. She was a Mission Study Teacher for the Conference Cooperative Christian Mission Education Events and traveled all over the Eastern U.S. teaching courses. She volunteered with UMCOR and made several mission trips to the UMCOR warehouse, Sager Brown in Louisiana, to help with projects she was involved in. Maud also made several mission trips to Honduras with Honduras Outreach Inc. HOI and was very proud of being a member of the HOI teams where she did everything from helping mix concrete to holding flashlights for the visiting dentists and doctors. Maud served for many years with the Nursing Associates for Nell Hodgson Woodruff School of Nursing, at Emory University, taking the responsibility of several leadership positions including President. Maud was an avid walker and hiked the Appalachian Trail from Springer Mountain in Georgia to Blackrock, Virginia where she fell and broke her arm, thus ending her trip. She also walked every year of the Wesley's Walk for Others from it's inception in 1982 until 2006. She also participated in several heart walks after her heart surgery in 2007. Maud was also an avid knitter and quilter and provided many hand-knit items to Naphtali, Romanian Orphanages, and to the Winship Cancer Institute. She provided a quilt to Quilts of Valor. She was a member of the Gwinnett Quilting Guild, and a charter member of Clicks and Sticks Knitting Guild. Maud is survived by her daughter, Margaret Jenkins, her son, Robert Tyler, her five grandchildren, Abraham Usher, Daniel Usher, Anna Tyler Hamlin, Will Jenkins and Matt Jenkins, and her two great-grandchildren Zack and Ian Usher. Family and friends will be received for visitation on Thursday, November 29, 2012 from 2:00 – 4:00 and 6:00 – 8:00 p.m. at Wages & Sons Funeral Home, 1040 Main Street, Stone Mountain, GA. Funeral services will be held Friday, November 30, 2012 at 1:00 p.m. at Mountain Park United Methodist Church, 1405 Rockbridge Road, Stone Mountain, GA 30087 with the remains placed in state at 12:00 p.m. Burial will be held at the Decatur City Cemetery, Bell Street, Decatur, GA. Contributions in lieu of flowers may be made to Untied Methodist Children's Home or to the North Georgia Conference of the United Methodist Women. Wages & Sons Stone Mountain Chapel 770 469-9811. Express condolences at www.wagesandsons.com