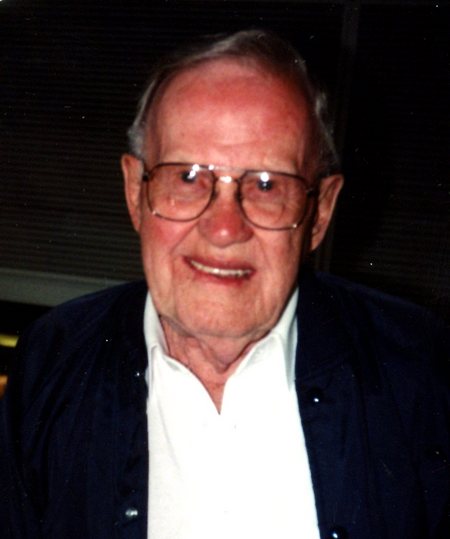 Earl Hunt, age 93, of Stone Mountain, GA died peacefully at Hospice Atlanta, on Wednesday, January 16th, 2013. He is survived by his wife of 44 years, Daphne Amidon; Sons: Earl Jr. and wife Andrea, Ted and wife Diane. Grandchildren: Earl III Scott Beaver, Todd Suzie, Ted, Jr., Joshua, Michelle Victor Hays and Henry Stacey. Great grandchildren: Madilyn, Nicholas, Alexandra, Anthony and Hayden. He was preceded in death by his youngest son, Michael in 2009. Born in St. Louis, MO in 1919, he attended Price School and Washington University. He enlisted in the U.S. Navy in 1942, doing his basic training in San Diego. He lived aboard the Delta Queen Riverboat for 3 months awaiting his orders to ship out. He qualified for hard-helmet deep sea diving at Pier 88 New York City, where only 1% of applicants qualified. His Navy Service included participation in the invasions of North Africa, Sicily, Italy, Anzio. and the D-Day landings. He was called to the Pentagon in early 1945 and assigned to the Office for Strategic Service OSS. Shortly thereafter he departed New York aboard the Liberty Ship Joseph LeConte, joining a convoy through the Suez Canal to Calcutta, India. He flew over the "Hump" Himalayas to Kunming, China and then on to Chungking, where he was assigned to SACO Sino American Cooperative Organization from March to August 1945, training the army of Chiang Kai-shek in the attempt to stop the communist infiltration of China by Mao Tse-tung. After returning home, he entered the world of sales, working for 3M, Marquette Corporation Minneapolis, MN and Applied Power Milwaukee, WI. His successful career included the positions of Regional and National Sales Manager. He moved to Atlanta, GA in 1978, where he retired. He and his wife enjoyed travelling and playing golf. As an avid golfer, he scored three holes in one! His favorite compliment to fellow golfers was "that shot was awesome," gaining him the nickname, Awesome Earl. He had another nickname. He loved feeding the birds and squirrels in his neighborhood so they named him the "Birdman of Hidden Hills. "In lieu of flowers, donations may be made to St. Michael & All Angels Episcopal Church, Stone Mountain, or Hospice Atlanta, 1244 Park Vista Drive, NE, Atlanta, GA 30319. Funeral service will be held at St. Michael & All Angels Episcopal Church, 6780 James B. Rivers Drive, Stone Mountain, at 11:00 a.m. Monday, January 21st, 2013, The Rev. Dr. Paul A. Elliott, officiating. 770-469-8551