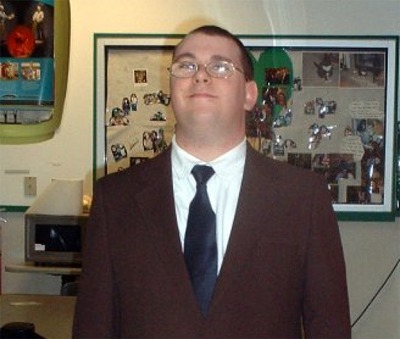 Marvin “Ray” Back, 28, of Lawrenceville, GA, passed away on December 30, 2013.  He died of complications from pneumonia at the Gwinnett Medical Center in his hometown. Ray was born in Atlanta to Steve and Mary Ann Back on August 13, 1985.  He spent his elementary school years in Florida until he returned to Georgia where he graduated from Berkmar High School in Gwinnett County in 2005. Ray was proud of being an Eagle Scout and was an active member of several local Boy Scout groups.  He served as an Assistant Scout Master and the Webmaster in Troop 514.  He was a founding member of Amateur Radio Venturing Crew 73, in which he served as an Associate Advisor.  He was also a member of the Apalachee District Committee—the Boy Scout District for Northern Gwinnett County—in which he served as the District's Webmaster.  For all his work on its website, the District awarded him the District Award of Merit in 2007 and named him Scouter of the Year in 2012.  Additionally, he received the Vigil Honor in the Boy Scouts' National Honor Society, the Order of the Arrow, where he also served as the Webmaster of the local Canantutlaga Chapter. Ray was a licensed amateur radio operator, call sign KI4GRJ, and member of the Gwinnett Amateur Radio Society.  He combined his love for amateur radio and his love for Scouting by working in support of Jamboree on the Air, an annual Boy Scout event that uses amateur radio to link Scouts around the world.  Ray was also a founding member of the Northeast Georgia Council Radio Club.             Ray enjoyed computers, cartoons, and cats.  He worked hard and was curious about the world around him.  He was a thoughtful and caring family member and friend.  He never failed to make his mother laugh, even when she was in no laughing mood.  His determination and unique sense of humor will be missed by all who knew and loved him.  Ray is survived by his parents, whom he lived with in Lawrenceville.  He is also survived by his brother Philip, of Vermont, his brother David of Chamblee, GA, his sister Janet Anderson of Roswell, GA, and his cat Schultz. His wake will held Friday, January 3, 2014, at Wages & Sons Funeral Home, located at: 1031 Lawrenceville Highway Lawrenceville, GA 30046 (770) 277-4550 https://www.wagesandsons.com His family will be there to receive mourners from 2:00 p.m. to 4:00 p.m., and from 6:00 p.m. to 8:00 p.m.  The Boy Scouts will perform a special ceremony prior to 8:00 p.m. that day. His funeral will take place at the same location on Saturday, January 4, 2014, from 2:00 p.m. to 3:00 p.m.  Mourners are expected to arrive half an hour early.  Immediately after the funeral, a procession will take Ray to Gwinnett Memorial Park where he will be laid to rest.  The park is located at: 925 U.S. Highway 29 South Lawrenceville, GA 30046 (770) 962-7630 Condolences may be sent to his family at: 2028 Hunters Branch Ct., Lawrenceville, GA 30043