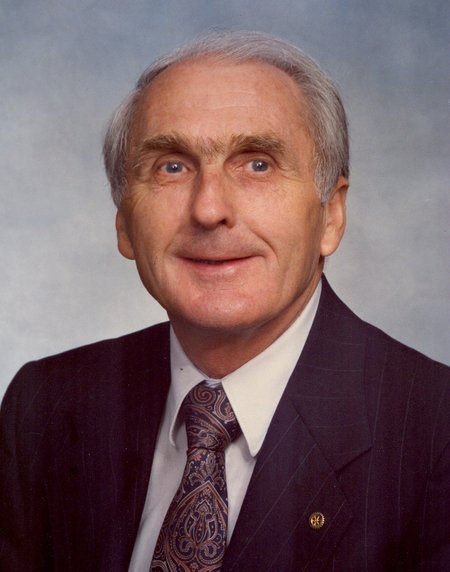 John William J.W. Benefield, Jr., 86, of Lawrenceville died December 30, 2011 at his home. Born March 24, 1925, in the Dacula-Harbins area of Gwinnett County, he was the son of the late John William and Lula Hall Benefield. He graduated from Dacula High School in 1942, and served in the U.S. Navy during World War II aboard the aircraft carrier USS San Jacinto. In 1946, he entered Abraham Baldwin Agricultural College in Tifton. He received his undergraduate and graduate degrees from the University of Georgia. He married his sweetheart, Sara Smith in 1949. In addition to his wife of 62 years, he is survived by two daughters, Susan B. Jim Cooper of Lawrenceville, and Ann B. Randy Davis of Dacula, and a grandson, Justin W. Davis of Dacula and Berry College in Rome. He began his career in education in 1950, teaching agriculture to Bethesda and Central Gwinnett High Schools in Lawrenceville. He became Assistant Superintendent of Gwinnett County Schools in 1961 and was named Superintendent in July, 1967. He was named Outstanding Superintendent of 1977 by the Georgia Association of Education Leadership. He was the former owner and president of Modern Electric Supply Co. in Lawrenceville and Gwinnett Electric Supply Co. in Lilburn. He served on the Board of Directors of Gwinnett Federal Savings Bank and also the Investors Bank and Trust. He was a member of Ebenezer Baptist Church in Dacula, but for the past 53 years had been a member of Bethesda United Methodist Church in Lawrenceville. He was a member of the Lawrenceville Rotary Club and served on the Board of Directors of the Gwinnett County Fair Association for many years. He was on the Gwinnett Tech Foundation, the Board of Directors of the Gwinnett Convention and Visitors Bureau. He was a trustee at Georgia Gwinnett College and was involved with the American Red Cross, the Boy Scouts of America and the Kiwanis Club. He was named Citizen of the Year by the Gwinnett Chamber of Commerce in 1980 and was elected as the Chamber's president in 1984. He had also served as a Chairman of the Gwinnett United Way Campaign. He was a Supervisor with the Georgia Resource Conservation and Development Service. A former Board Member of Eastside Medical Center in Snellville, he had served as a trustee for the Gainesville GA Junior College Foundation. The Gwinnett Council for Quality Growth awarded him its Button Gwinnett Award in 1992 and its Four Pillar Award in 1993. He was honored in 1984 by the opening of Benefield Elementary School in Lawrenceville. Funeral 3:00 Sunday, January 1, 2012 at Bethesda United Methodist Church in Lawrenceville. Burial will follow at Ebenezer Baptist Church Cemetery in Dacula. Visitation 2:00 – 5:00 and 6:00 – 8:00 p.m., Saturday, December 31, 2011 at Wages & Sons Gwinnett Chapel. In lieu of flowers, donations may be made to Bethesda United Methodist Church, P.O. Box 464597, Lawrenceville, GA 30042-4597 or Gwinnett County Public Schools Foundation, 437 Old Peachtree Road NW, Suwanee, GA 30024-2978. Wages & Sons Gwinnett Chapel, 1031 Lawrenceville Highway, Lawrenceville, 770-277-4550. Online condolences may be expressed at www.wagesandsons.com.