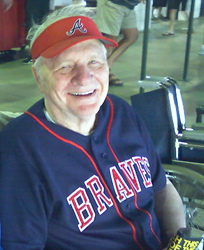 Frank Eldridge Binkley, Sr., 79, of Lawrenceville, GA passed away peacefully on April 16th, 2012. Frank was born July 3rd, 1932 in Nashville, TN where he graduated as student body president from his beloved Cohn High School and later attended Vanderbilt University. After moving to Athens, GA he founded Binkley Construction Company which was instrumental in much of Athens' early development. Despite many health conditions over the years, Frank flourished as a business man, a pilot and cherished husband and father. He is survived by his spouse, Sue Smith Binkley, of Lawrenceville, GA, his five children, Sheron Binkley and her husband, Ed , Frank E. Binkley, Jr. and his wife, Jennifer, John C. Binkley, DMD and his wife, Tina, Kyle B. Binkley and his wife Laura, Sabrina B. Zappone and her husband, Dan and their families including his 12 grandchildren and 4 great-grandchildren. Services will be held Saturday, April 21st at Wages and Sons Gwinnett Chapel at 2:00p.m. The family will receive friends beginning at 1:00p.m. Internment will be immediately following the service at Gwinnett Memorial Park. Wages & Sons Gwinnett Chapel, 1031 Lawrenceville Highway, Lawrenceville, 770-277-4550. Online condolences may be expressed at www.wagesandsons.com