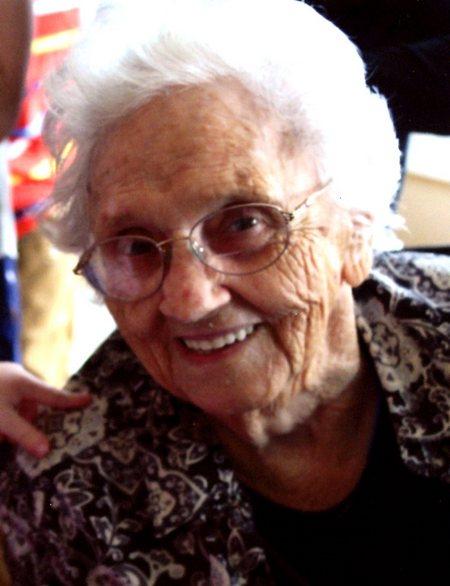 Mary Myrta Yates Buell stepped from this world into Heaven on Monday, March 25, 2013. Born, February 19, 1917, in Jonesville, Virginia, she was the second to the last of a large family. She is preceded in death by all of her siblings, her husband, John Buell Sr. and her son William Clark Buell. Myrta is survived by her daughter Phyllis Hazlewood and the late Reverend Bill Hazlewood of Knoxville, Tennessee, and her son John Buell Jr. and his wife Susan Buell of Commerce, Georgia. Myrta was fondly known as "Memaw" to her 5 grandchildren, 12 great-grandchildren and 5 great-great-grandchildren. Myrta grew up in Virginia and married a young man named John Buell, who later surrendered to the call of ministry. Hand in hand, the two of them served God together as pastor and wife for fifty-seven years. They served from Kentucky to Texas to North Carolina to Florida to Tennessee to Georgia. Myrta was a friend to all who met her. Her soft-spoken manner and gentle spirit drew others as she served in the Women's Missionary Union and taught both Sunday School and Vacation Bible School. She humbly served others with her heart for missions. Wherever God led, she followed. Mytra was known not only for her service to the Lord but for her great cooking. She loved hosting dinners for her large family. After retiring from the ministry, Myrta and John built a home in Stone Mountain next to their family, where they made many memories. Myrta lived there until three years ago when she moved with her son and daughter-in-law to Commerce, Georgia. Myrta was a member of Stone Mountain First Baptist Church. One only has to look at her family to see the legacy she leaves. She was loved by many, but our loss is Heaven's gain. In lieu of flowers, please send donations to Stone Mountain First Baptist Church, P.O. Box 806, Stone Mountain, Georgia 30086, marked "Annie Armstrong Missions Offering." Funeral services will be held Saturday, March 30, 2013 at 11:00 a.m. at Stone Mountain First Baptist Church with the remains placed in state at 10:00 a.m. Dr. Dan Parker and Dr. Warren Moorhead officiating. Interment will follow at Stone Mountain Cemetery with Rev. Jerry Jones officiating. The family will receive friends on Friday from 4:00 until 8:00 p.m. at Wages & Sons Stone Mountain Chapel 770 469-9811. Express condolences at www.wagesandson.com.