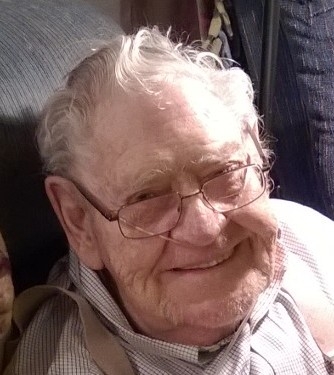 Clayton Elliott, formerly of Fergus Falls, MN, died Saturday, Jan. 31, 2015 at his home in Suwanee, GA, where he has lived for the past 8 years with his daughter, Susan (Elliott) Pattee. Clayton was born July 5, 1926 to Glaude & Selma Elliott. He attended Fergus Falls High School until early in 1945 when he was drafted into the Army. He served during WWII in the Philippines. He later got his diploma from the Army. Growing up he was a Life Scout in the Boy Scouts, and attended Grace Methodist Church, where he was a member until his death. He married Anna Cecelia Wikholm, “Cec” to her friends, on May 27, 1949. They had 3 children, Susan, Daniel, & Charles. They lived in Moorhead, MN, for a few years while he worked at a Pontiac Dealership. They moved back to Fergus Falls in 1953. He worked at a Genuine Parts Company from 1955 to 1990, where he was co-owner for 12 of those years. After he retired he worked for ten years as the gate-hut security at Fleet Farm. In October of 2006 he moved to Suwanee, GA, to live with his daughter and her family, where he stayed until his death. He was a long time member of Fergus Falls Elks Lodge # 1093. In the late 1960’s he was Elks Exalted Ruler, and the Fergus Falls Lodge was the largest one in the state of Minnesota during his term. In 1970 they bought a lake lot on Jewett Lake, where he loved spending time. He even went out there in the winter to do projects and have a fire in his fireplace. Preceding him in death were his parents, his wife, and his son Chuck. Survivors include, brother Joseph(Bev) Elliott, of Omaha, NE, sister Mary Wolbert, of Santa Rosa, CA, and children, Susan Pattee, of Suwanee, GA, and Daniel Elliott, of Long Beach, CA;  8 grandchildren, Steven(Sarah) Elliott, Cody Elliott, Errol(Tabatha) Pattee, Paul Pattee, Anna(Ben) Wallen, Britta Pattee, Heather(Daniel) Medrano, Shannon(Lex) Bazemore; 14 great-grandchildren; 2 great-great- grandchildren; 4 nieces and 3 nephews. Memorial Service to be held Sunday, Feb. 8, 2015 at 2 p.m. at Wages & Sons Funeral Home, Lawrenceville, GA. A Graveside Service will be held at Oak Grove Cemetery, Fergus Falls, MN. In June.