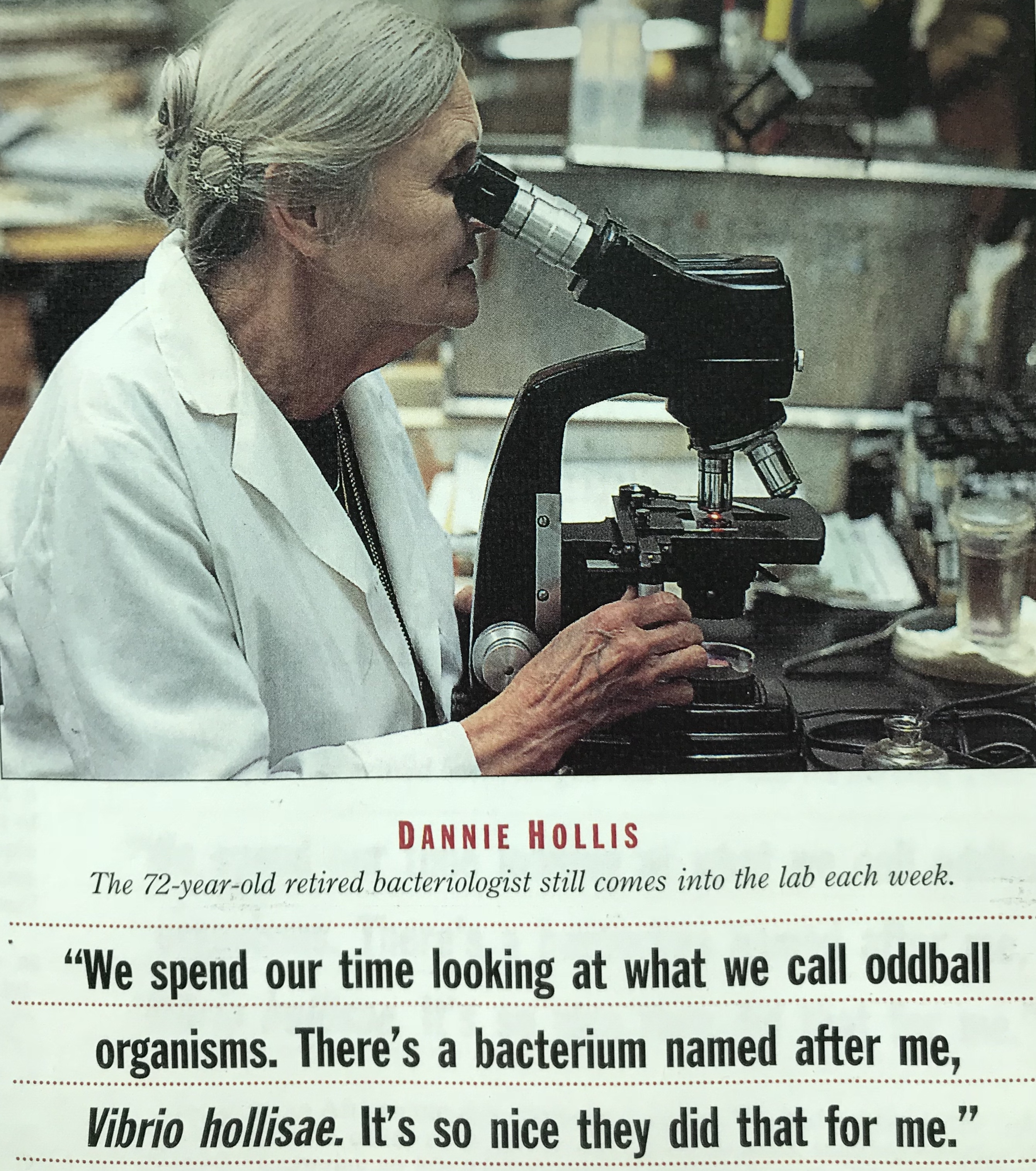 (Mrs.) Dannie G. Hollis, B.S., M.S. b. October 24th, 1922 and d. May 22nd, 2018 (Mrs.) Dannie G. Hollis, B.S., M.S., microbiologist, National and International Treasure was 95 1/2 years old at her death. (Mrs.) Frances Brenner, B.S.,M.S., colleague and friend, spoke for all when she wrote “We will miss our precious Dannie.” Mrs. Hollis is survived by her daughters, Ms. Lottie E. Hollis of Lawrenceville, Georgia and Ms. Virginia B. Houghtaling of Stone Mountain Village, Georgia, and her nieces and nephews, great nieces and great nephews, and great great nephews: Ms. Mary Vaste Gillis of Santa Rosa, California and son, Mr. C. Byron Reins of Sunnyvale, California; Mr. Martin Matthews and daughter, Ms. Brook Matthews of Gainesville, Georgia; Mr. and Mrs. John Hill and son of Pennsylvania; Mr. Douglas Matthews and children, Ms. Anna Matthews and Mr. Connor Matthews of Gainesville Georgia; Mr. Tove Elfström and Mrs. Susan Smith Elfström of Falls Church, Virginia and children, Ms. L. Madelene Elfström of Mesa Verde, Colorado, and Mr. S. Jonas Elfström and Dr. K. Miriam Elfström of Stockholm, Sweden, and Dr. I. Manfred Elfström and Mrs. Freya Putt Elfström and sons, Master Luca D. Elfström and Master Rowan A. Elfström of Cambridge, Massachusetts; Mr. James Hill and Mrs. Lisa Hill of Saint Augustine, Florida and daughters, Ms. Elizabeth Hill and Ms. Julia Hill of Pennsylvania. Mrs. Hollis’ renowned work in microbiology earned her the title of ~the most important living microbiologist~ and with her death ~the most important microbiologist of all time. She was born in Gillis Springs, Georgia, a small family settlement near Soperton, Georgia. Growing up on a working farm, her father, (Mr.) Lonzo R. Gillis, shepherded his youngest child as she grew to explore the wonders of biology. Her father took his stewardship very seriously and realized his daughter was quite brilliant and attached to the earth even as a young child. Her farm chores were daily games of discovery and each day held new knowledge. Mrs. Hollis graduated valedictorian from high school in Soperton, Georgia. She was just 16 years old. Her sister was attending college but there was no money for two children in college. At that tender and young age, Mrs. Hollis, the rural girl from a dirt farm with no running water and no electricity, received academic scholarships and work-study scholarships. She needed $27 a month and her father agreed. Between long bus and train trips, in two years she graduated from West Georgia College in Carrolton,”Georgia and immediately went to the University of Georgia in Athens, Georgia. Mrs. Hollis graduated from UGA in 1943, with a Bachelor of Science degree and a double major in zoology and chemistry. Immediately following her graduation from UGA, she was chosen to attend an elite certification post graduate program at Piedmont Hospital in Atlanta, Georgia. From Atlanta, Mrs. Hollis moved to Maplewood, New Jersey and worked for the Elizabeth Biochemical Laboratory for eight years. Then, she worked in several Veterans’ Administration Hospital laboratories and in 1954 moved to Atlanta, Georgia to work in clinical microbiology for the Veterans’ Administration Hospital at Fort McPherson. Mrs. Hollis came to CDC recruited by (Miss) Elizabeth O. King in 1961 to work in the General Bacteriology Laboratory, now the Special Bacteriology Reference Laboratory. Miss King had worked over a decade developing a systematic approach to the identification of Gram-negative pathogenic bacteria and mentored Mrs. Hollis from 1961–1966. After Miss King’s death, Mrs. Hollis continued her mentor’s work further characterizing bacteria, and identifying and naming new species. She worked in the same laboratory at CDC for 51 years. During that time she received her Master of Science degree from Georgia State University in 1978. Mrs. Hollis officially retired after 33 years at CDC but never left her lab. She continued as a Visiting Scientist volunteering her wisdom and acumen for another 18 years. Her scientific expertise was the characterization and identification of rare and unusual pathogenic bacteria from around the world. She never ceased to amaze colleagues with her encyclopedic mind. Mrs. Hollis’ incredible memory was not merely eidetic or photographic. Her memory included all known organisms and the specific details and characteristics of each organism. She could remember the numeric code given to organisms which had passed through her hands decades before. Mrs. Hollis’ membership affiliations included the American Society for Microbiology and its Southeastern Branch, Sigma Xi, American Society of Clinical Pathologists, Southeastern Association for Clinical Microbiologists, The Scientific Research Society of America, and The National Registry of Microbiologists of the American Academy of Microbiology. Mrs. Hollis humbly and gracefully accepted the numerous awards and honors including the 2010 Joseph E. McDade Award for Lifetime Scientific Achievement. Dr. McDade was one of many who called Mrs. Hollis a National Treasure. She was a genius of brilliance in the scientific world. As an educator, she shared all of her knowledge giving every individual her personal attention. She was an extremely, patient and humble woman. Her caring and kindness were limitless. Although a bright and wonderful light is extinguished with her death. Mrs. Dannie G. Hollis left a scientific legacy which will light the way for future explorations in science in the years, decades and even centuries to come. If you were fortunate to have met her, you are truly blessed. .............................. .............................. .............................. Afterward notes: Mrs. Hollis was a magnificent and humble woman, the most steadfast and understanding of friends, a stunningly brilliant scientist and the absolute best of mothers. All will mourn Mrs. Hollis for she had the greatest of hearts. Her faith in God unmovable. She was the best of the best, loved and treasured by all. Mrs. Hollis will rest with her parents, Mr. and Mrs. Lonzo R. Gillis, and her grandson, Mr. Parker T. Houghtaling Hill, in the historic Gillis Family Cemetery near Soperton, Georgia in Treutlen County. The memorial service for (Mrs.) Hollis, a devoted and long standing member of Scott Boulevard Baptist Church in Decatur, Georgia will be on Saturday, June 16th, 2018 at 3:30 p.m. in The Chapel of The First Baptist Church of Decatur, Georgia. o Sent from my iPad