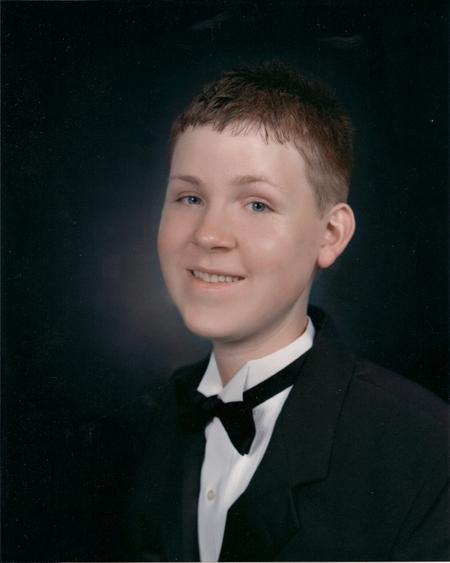 Every day of his life, he fought. Amidst the sweetest joys and wonders of childhood -- before he could even know anything of the cold ferocity of his foe -- he fought. As he matured through adolescence and into young manhood, with an ever-increasing grace and an immovable resolve, he fought. Thursday, his battles came to an end. In the early morning hours of August 23, 2012 -- just a few days past his twenty-fifth birthday -- his mortal fight with Duchenne Muscular Dystrophy was concluded, and Thomas Aloysius Devlin, III, returned to the arms of his loving Creator who had blessed him with life. A teacher and coach once remarked that Tom made better use of what he had been given in this life than any person he had ever known. Well aware that eventually every one of the muscle cells in his body would fail him, Tom grabbed hold of life and showed a beautiful determination to do everything he was capable of. Day by day, he lived in a fashion that proved no mere medical diagnosis would ever define him. This determination manifested itself in multiple ways throughout his life, as he immersed himself in his many interests and passions. His love of music sprang from his soul, finding joy in everything from Delta blues to classic rock to mainstream jazz. He surrounded himself with his music and mastered the history and nuances of every genre he explored. His love of sports was unbridled, and as he approached everything in life, he was a true student of each form of athletic competition, particularly baseball: "He knew something interesting about every player in any game we were watching," said his cousin, who picked up Tom's love of sports and allegiance to Atlanta teams. His almost-encyclopedic knowledge of sports of all kinds meant only the rarest of sports gurus could challenge Tom's expertise. Tom's scholarly pursuits followed the same model, especially in history and cartography. Touch on any era in history, and Tom could easily tap into facts and anecdotes that often surprised even more seasoned and more formally-trained historians. As he masterfully and quickly moved about the Web via voice-recognition software, he would often call up maps throughout the world to study them for fun, beauty, and a sense of a distant place. In high school, he excelled on the school's Academic Team, competing with his teammates at regional and national competitions, and was named to the All-State Academic team two years running, as both a junior and a senior. Tom thrived in intellectual competition, moving beyond his natural strengths in history, geography, and sports, to develop expertise in the areas of literature, art, anthropology and world religions.