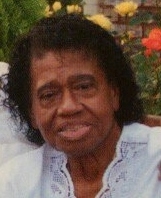 Elaine Esperanza Tom-Rose (nee Hylton) was born in Kingston, Jamaica on March 11, 1932. She spent most of her early years in Kingston, Jamaica where she became a master seamstress under the tutelage of Miss James. She also started her training in nursing while living in Jamaica. Before leaving the beautiful island of Jamaica, she met and married Oswald Tom (deceased, November 1980) and was the mother of 5 children. She immigrated to the US in 1969 and settled in Bronx, New York. She worked for many years as a Personal Aide to the Solomon family of Yonkers, New York and then retired from Frances Schervier Home and Hospital (Bronx, New York) where she spent over 30 years in service. Many years after the death of her first husband, she met and married Joslyn Rose (deceased, August 2013). Upon retirement, they both moved to Lawrenceville, Georgia. Her greatest joy during her later years was to care for and be visited by her children and many grandchildren. After battling dementia, surviving breast cancer and a massive stroke, she died peacefully at her daughter’s home on October 17, 2018. She is survived by her children – Hugh, David, Donovan and his wife Marcia, Debbie and her husband John Stephen, Warren and Janet; 29 grandchildren; 21 great grandchildren; her sister Madge Martin (Kong), her brother Trevor Hylton and his wife Marjorie; many nieces and nephews and other relatives and friends. A funeral service is planned for Saturday, October 27, 2018, 11:00 am, at the The Pentecostals of Stone Mountain, 6212 Memorial Dr, Stone Mountain, GA 30083. Interment will follow at Gwinnett Memorial Park, 925 Lawrenceville Hwy, Lawrenceville, GA 30046. Online condolences may be expressed at www.wagesandsons.com.