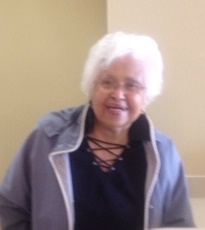 Enid Tullis Willis, 99, of Lilburn Georgia passed away quietly in her sleep on Saturday, April 27, 2019 at Sunrise Senior Living facility.   She was born on August 29, 1919 in Jamaica West Indies in the town of Grange Hill, Parish of Westmoreland, at the end of WWI to the late William Edward Tullis and Mable Scott.

She later migrated to England where she married A. T. Karram and had a daughter, Rhema. Tommy Karram was lost at sea during WWII while in the service of the British Merchant Marines.   In 1944 Enid married Jackson P. Willis Jr., a young sergeant from Kentucky who was stationed in London during WWII.  They married in London and after the war settled in Evansville, IN where they raised Rhema and five more children. Enid worked at St. Mary’s Medical Center in Evansville as unit secretary on the maternity ward where she retired after 35 years of service.   She also served as a Eucharistic Minister for many years at St. John’s Catholic Church in Evansville, IN

Enid is preceded in death by her husband of 38 years, Jackson P. Willis Jr.; and a daughter, Janeen Walker of California.

Enid was a long time member of St. Lawrence Catholic Church in Lawrenceville, GA. Contributions in lieu of flowers can be made to the Society of Saint Vincent de Paul Donations may be mailed to:

In Memory of Mrs. Enid Willis

Online condolences may be offered at www.WagesandSons.com.