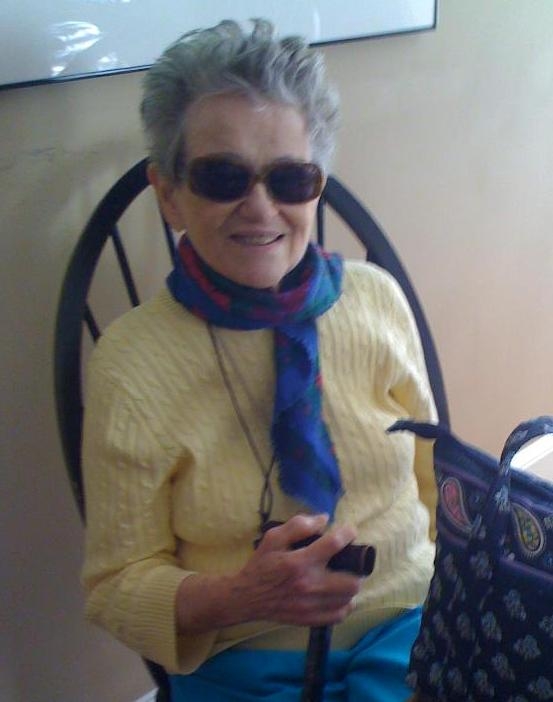 Jacqueline “Jacky” Jordan passed away peacefully on Labor Day, Monday, 9/4/17, at the Breman Jewish Home in Atlanta, Georgia. Born in New York City to Jack Jordan and Ethel Lefferts Jordan (of Russian ancestry) on April 18, 1927, she had just celebrated her 90th birthday this past spring. Jacky and her sister, Barbara “Bobbie” Lewis, grew up in Hartsdale and Scarsdale, NY, and went to high school at PS-9 in New York City. Jacky loved swimming, reading and going to movies (the newsreels during the war made a big impression on her). She attended Averett University in Danville, VA for a year until the death of her mother when she was 19. She returned home and took classes at what is now NYU. She worked as a secretary and did some editing for Time Life Magazine for several years until she married and moved to Atlanta, GA with her husband in 1954. During her 14 year marriage, she and her husband had four children – Eileen, Ken, Dave and Russ. Moving from cosmopolitan New York City to the segregated South in the 1950’s, where signs saying “Colored Only” and “Whites Only” on bathrooms and water fountains were common place, had a profound effect on her. In her own small way, she championed equality and civil rights for all people by raising four good citizens who were constantly encouraged to treat all people with dignity and respect no matter what their race, country of origin, religion or gender. During her marriage, Jacky worked at home as a housewife and did some volunteering. She spearheaded a “Mission to Milledgeville” (the hospital for the mentally ill in Milledgeville, GA) - collecting clothes, shoes, furniture and personal supplies and then driving a caravan of her friends and neighbors to deliver those items to residents of the facility. A few years after she divorced in 1968, financial concerns required her to retrain as a secretary (at Georgia State University) and return to the work force. She worked for a variety of companies during her secretarial career, including Johnson, Lane Investment firm and Northside Hospital. Jacky retired at age 72 and spent her time reading biographies about politicians and movie actors and helping take care of her grandchildren. Jacky’s number one focus throughout her life was always her children. Through both words and actions, she taught them what unconditional love really was. Jacky is survived by her four children and their families: - Her daughter and son-in-law, Eileen and Tony Tantillo, and their children, Lisa and Kevin. - Her son and daughter-in-law, Kenneth and Laura Shainker and their 5 children, Margaux, Mariah, Juliet, Clifton and Brent and 7 grandchildren. - Her son and daughter-in-law, David and Laura Shainker and their 3 children, Sarah, Jessica and Ben. - Her son and daughter-in-law, Russell and Lisa Shainker and their son, Brian A celebration of Jacky’s life will take place on Thursday, Sept 7th at 6:30 at David Shainker’s home and another is scheduled for Saturday, Sept 9th, from noon to 8:00 at Jacky’s daughter’s home. Family and friends are welcome to attend. Condolences can be sent to . The family would like to thank all of the wonderful caregivers at the William Breman Nursing Home, The Cohen Home and the Weinstein Hospice for their loving care of Jacky during the final months and years of her life. In lieu of flowers, please consider a donation to the Alzheimer’s Association, The Atlanta Jewish Home Life Communities