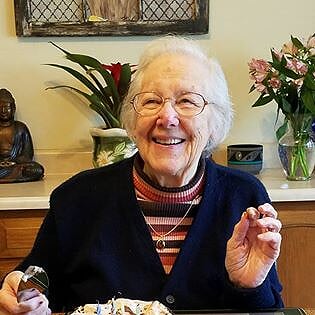 Jean, an only child, was born and raised in Richmond, VA to Isaac and Ester (Meyer) Strauss. She graduated from Thomas Jefferson High School in 1946 and attended the Richmond Professional Institute of the College of William and Mary, hoping to pursue a career in music.

As a child, Jean loved taking train trips to Missouri to visit her grandfather at his farm and to spend time with her beloved cousins. After marrying in 1955, she and her husband moved in 1956 to Atlanta, GA. Over the years, Jean was involved with the League of Women Voters and worked many elections as a poll manager. For many years she was also an enthusiastic knitter and a member of an active group of knitters that occasionally held conferences in the NC mountains.

In Atlanta, Jean was a member of Unitarian Universalist congregations where she sang in the church choir, participated in a social group for retirees, and with her husband was active in an environmental/hiking group. In retirement, Jean and her husband were able to do a fair amount of traveling and she spent several months each year with her husband at his ancestral home in Boscawen, NH, which she very much enjoyed.
Jean was very devoted to her family and friends and will be dearly missed.

A memorial service is being planned tentatively for the Fall. An announcement will go out once a date is set.