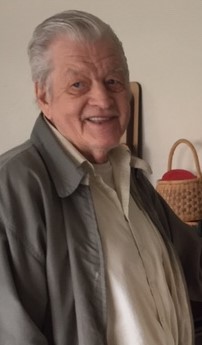 John E. Gilbert, of Buford, GA, passed away on January 11, 2020. John was born on February 19, 1932, in Janesville, WI, to parents Wilbur and Kathyrn Gilbert. John lived in Janesville for many years and graduated from Janesville High School. He was drafted into the United States Air Force in April 1951 and was honorably discharged in April 1955. John met and married his wife of over 50 years in Spokane, WA.

John began work at the Ford Motor Co. in Los Angeles, CA. He later moved to a sales position with R.J. Dick Co. and relocated his family to Minneapolis, MN; shortly thereafter they moved to Iowa. Another opportunity presented itself and he joined Belting Inc. and took a sales position in Kettering, OH. After a few years in Ohio he was promoted to National Sales Manager and relocated to Atlanta, GA. Belting Inc reincorporated as Habasit Belting Inc. and he rose to Executive Vice President of Sales. John later was instrumental in helping Nitta Corporation in Japan establish a subsidiary in Atlanta and became President of the U.S. subsidiary.

John retired in 1990 but dabbled in a couple of other business ventures before finally retiring in the late 1990s. He was a hardworking, determined, self-made businessman. He was a handyman’s handyman and could fix almost anything. He was also very generous and looked out for his family.

John came from a large family: 5 sisters, all of whom predeceased him, and two brothers. He was predeceased by his wife, Lola, and his daughter, Lynne. He is survived by his sons: Rick Carrell, Kansas City, MO; Randy Gilbert (Marida), Peachtree Corners, GA; Ron Gilbert, Buford, GA; and Brian Gilbert (Wende), Lawrenceville, GA; brothers: Dick Gilbert and Tom Gilbert (Mary); 14 grandchildren; and 4 great-grandchildren.
A memorial service will be held on Sunday, January 26, 2020 at 4:00 PM at Wages and Sons Gwinnett Chapel, 1031 Lawrenceville Highway, Lawrenceville, GA 30046.