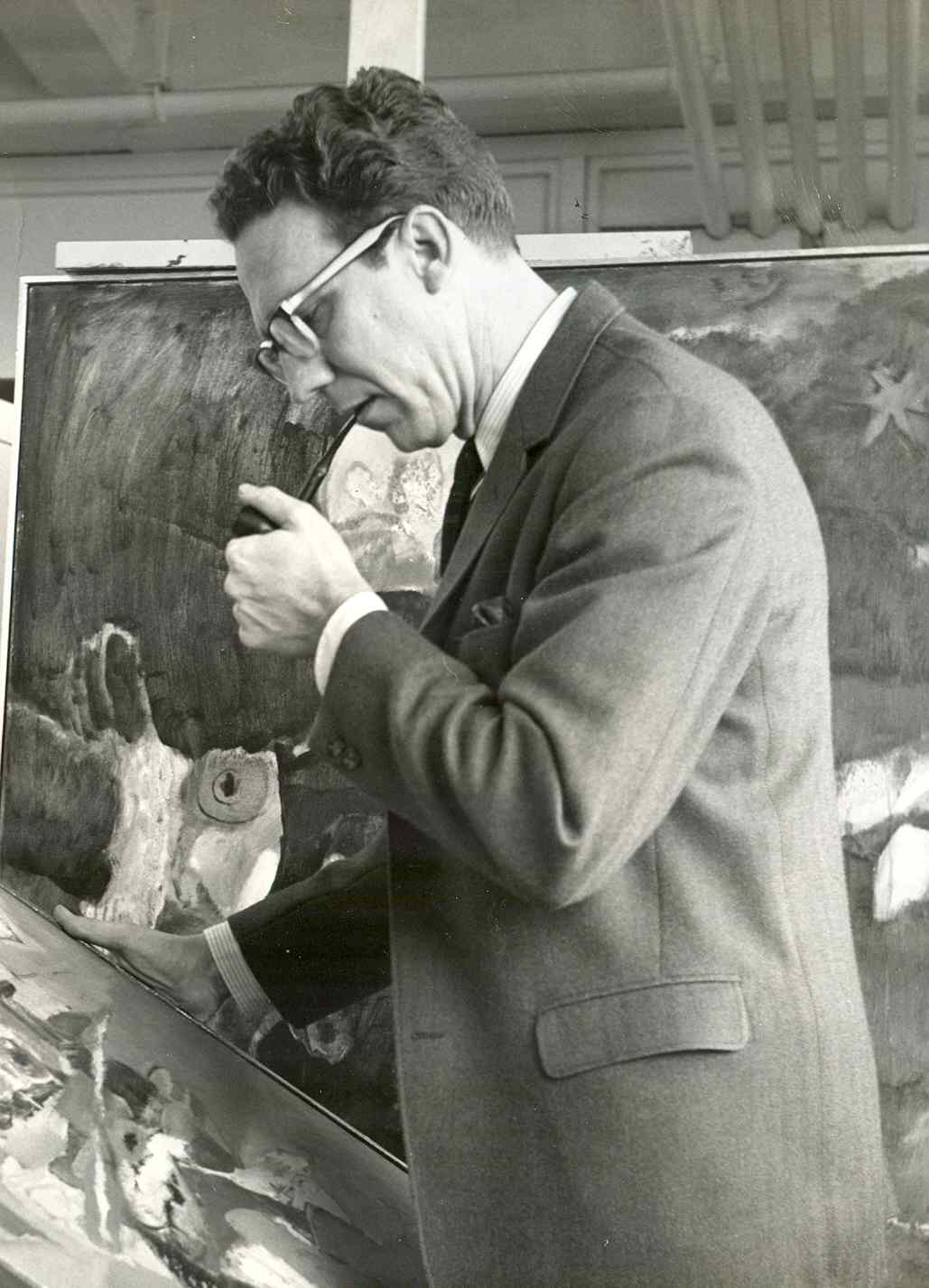 Joseph Samuel Perrin, Professor Emeritus, and the founder and former Chairman of the School of Art and Design at Georgia State University, passed away April 4th after a brief illness. Joe was born in 1923 in Tucker, GA, to George Weston and Rozelle Thornton Perrin. After graduating from Clarkston High School in 1941, he attended Georgia Tech majoring in aeronautical engineering. At the age of 19, he left college to serve his country in World War II as part of the 84th Infantry Division (Railsplitters). He fought throughout the Ardennes Forest in France, and engaged in combat in the Battle for Geilenkirchen and the Battle of the Bulge. After recovering from injuries, Joe was reassigned to Paris where he designed airfields for the Army Air Corps. While in Paris, he had the opportunity to visit many cathedrals and art museums and decided to pursue art as a career rather than engineering. Upon his return, he studied at the Ringling School of Art and the High Museum School of Art. He then earned a degree in Fine Arts from the University of Georgia, and in the early 60s was awarded a Danforth Foundation grant allowing him to complete his post-graduate work in drawing, painting, and sculpture at UCLA. His art career began as a Professor of Art at the University of New Hampshire in 1950. In 1953, he returned to establish the School of Art and Design at Georgia State University. Throughout the next thirty years the GSU art department expanded under his leadership from a one studio program with forty students, to a nationally respected program serving thousands of students in a seven story fine arts facility. Although a nationally recognized artist in his own right, his greatest love was teaching, helping others, and encouraging his art students. He also worked tirelessly to promote the Arts in Atlanta, and in his hometown of Clarkston by helping establish the Clarkston Community Center. He served as the President of the Atlanta Arts Festival, served on the Atlanta Civic Design Commission, was Chairman of the MARTA Arts Council and was instrumental in planning the original Underground Atlanta. He also designed the interior of the West Lake Marta Station. He served as curator of numerous art exhibitions throughout the Southeast. His paintings can be found in the permanent collection of the High Museum of Art, the Coca Cola collection, Mead collection, the Georgia Museum of Art, the Carter Presidential Center, and the Metropolitan Museum Recife, Brazil. Joe was married for 64 years to his wonderful wife Norma. They met as students at the High Museum of Art. She was his partner, encourager, and helper in every facet of his career. He was a devoted father to Chris, Jane, and Josie, and a loving grandfather and great grandfather. Throughout his life, Joe could be found every Sunday teaching Sunday school and attending services at Clarkston Baptist Church with his family. He had a deep faith in God, and his belief in his Savior, Jesus Christ could be seen in the way he helped others, in the way he cared about his students, and how he loved his family. Joe’s family members include: Wife, Norma Jane Howell Perrin (preceded in death). Children: Jane Perrin Layfield and husband, Richard; Josie Perrin Holdaway and husband, Kevin; Chris Perrin (preceded in death); and Whit Perrin Wright and husband, Russ. Grandchildren: Thomas Layfield and wife, Nicole; Weston Layfield and wife, Rachel; Owen Holdaway, Hailey Holdaway, and Nathan Holdaway. Great-grandchildren: Trey Layfield, Wyatt Layfield, Elias Layfield, Samuel Layfield, Owen Layfield, and Layla and Lyric Holdaway. Sister: Rosemary Harrison, Brother-in-law Claude Harrison (preceded in death), Sister-in law Clara Howell, Aunt Margaret Perrin, and many cousins. The family would like to thank all of the caretakers at The Bridge of Lawrenceville for the wonderful care and loving kindness they have shown our dad/grandfather over these past years. We also thank his nurse, Ms. Brenda Carter for her wonderful kindness and care, and for the gentle attention of Camelia Hospice. May God bless you all for the work that you do. A celebration of Joe’s life will be held in the Gwinnett Chapel of Wages and Sons, 1031 Lawrenceville Hwy, Lawrenceville, GA (770-277- 4550) on Sunday, April 13th at 3 PM with Pastor Nick Vipperman officiating. Viewing will be prior to the service from 2:00- 3:00 PM. Interment following the ceremony at Melwood Cemetery, 5170 East Ponce de Leon Avenue, Stone Mtn., GA. All friends, family, and former students are invited. In lieu of flowers, please consider a donation to Clarkston International Bible Church – 3895 Church Street, Clarkston, GA 30021 or The Pregnancy Resource Center of Gwinnett – 337 W. Pike Street, Lawrenceville, GA 30046