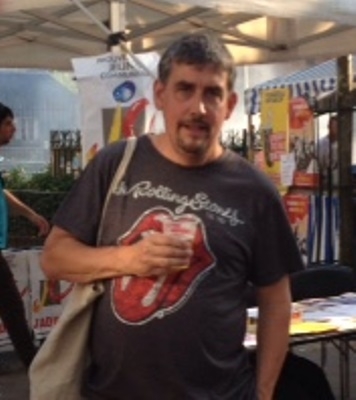 Karl Fredrick Jaeger, age 52, of Lawrenceville, GA passed away on Thursday, February 25, 2016. Karl Jaeger was born in Saline, Michigan, and along with his brother David, was raised in Detroit by his mother Joyce and grandparents Syd and Dorothy Merryweather. The family moved to Cleveland Ohio, where Karl attended Olmsted Falls HS. He moved to Atlanta in the late 1980's and worked as an auto mechanic. He and Elizabeth met in 1991 at a Braves baseball game and were married in 1993. Karl was able to achieve his dreams of owning and operating an auto repair shop when he purchased first Killian Hill Service Center in Lilburn and then Medlock Gulf in Decatur. His many other interests, apart from his family, were real estate investing, growing his business, traveling, and spending time with friends. Karl and Elizabeth have two boys: Alex, aged 15, and Sammy, age 10. They both attend Providence Christian Academy in Lilburn, where Karl was an active supporter of the football team. In additional to Elizabeth and boys, he is survived by his mother, Joyce Merryweather Smith and husband, James of Ft. Myers, FL; brothers, David Jaeger and wife, Tina of Columbia Station, OH, Charles Jaeger of Ann Arbor, MI, and Christopher Jaeger of Michigan. A memorial service will be held at 2:00 P.M. on Sunday, March 6, 2016 at Wages and Sons Gwinnett Chapel, 1031 Lawrenceville Hwy., Lawrenceville, GA, 770-277-4550. The family will receive friends one hour prior to the memorial service at the funeral home. In lieu of flowers, donations can be made in memory of Karl to The Providence Fund, 4575 Lawrenceville Hwy., Lilburn, GA 30047. www.providencechristianacademy.org/Karl . Online condolences can be expressed at www.wagesandsons.com.