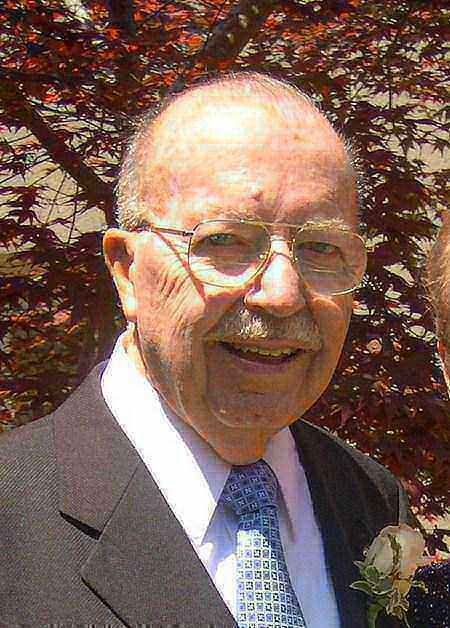 Thomas Joseph Kelly died at home on Monday, March 12, 2012, at approximately 2:00 AM. The end came a little sooner than his adoring family had expected, but by the grace of God it was quick and his beloved wife of 61 years, Gloria, was there holding his hand comforting him during his final hour. Tom grew up in Englewood, New Jersey with his loving Irish parents Walter and Julia and his sister Helen. He attended St. Cecelia School for all 12 years of his early education and was very proud of the fact that during his four years of high school at St. Cecelia, his football coach was none other than Super Bowl Champion and Green Bay legend Vince Lombardi, who was there learning the trade in his very first job out of college. Tom enlisted in the Navy the day he turned 18, as WWII was in its final days. Victory in Europe and Japan were both declared while he was still in basic training so he served his tour stateside working mostly in the Navy Medical Corps. Upon being discharged he used his GI Bill to attend St. Peter's College in Jersey City, New Jersey, where he graduated with a degree in Chemistry. While he was in college he and his best friend Oscar went roller skating one night and met two sisters, Joan and Gloria Mayer, whom they ended up marrying. Oscar married Joan and Tom married his soul mate and companion of the next 61 years, Gloria. After college Tom went to work in the laboratory of A. Gross and Company in Hoboken, NJ, and while there was called to active duty during the Korean War. After the war he accepted an offer from Arizona Chemical to be their Southeast Regional Sales Manager, packed his young family into a car, and moved to "The Great Unknown", Atlanta, Georgia. Almost as soon as they arrived, Tom knew he had found his home and except for a short hiatus at the corporate office in New Jersey towards the end of his career, he never left again. Tom believed with all of his heart in giving back and this was evidenced by his volunteerism in his church and civic communities. He was the first president of Northcrest Swim Club and the driving force behind the push to have it built. He was a Little League baseball coach, Boy Scout Leader, Board member of the Northeast Athletic Association, an active member of the Atlanta Chapter of the Chemical Sales Associates Org, and numerous other organizations. He was very active at The Immaculate Heart of Mary Catholic Church and the Kellys were one of the founding families of Holy Cross Catholic Church when it was formed to relieve overcrowding at IHM. During his tenure at Holy Cross, Tom served as president of the Parish Council, taught Sunday School, worked with Boy Scouts, was a Eucharistic Minister, helped with many fundraising and capital improvement projects, and was constantly at the church helping with general maintenance. Tom carried his desire to help others into his retirement as well. Over the past twenty years, Tom and Gloria have volunteered thousands of hours to the following organizations: The 1996 Centennial Olympic Games Opening Ceremony, the St. Vincent DePaul Society where they worked as case workers and taught classes in English as a second language, Cooking, and Household budgeting, The Fernbank Museum of Natural History where Tom was a docent and for years worked in the Sensing Nature Exhibit, Gwinnett Technical College as a teacher of English as a second language, St. Pius X High School, St. John Neumann Catholic Church where Tom has worked as both a Stephens Minister and a St. Vincent DePaul case worker. In addition to his passion for helping others, Tom loved to travel and experience new cultures and peoples. During retirement he visited every continent except Antarctica and had already booked additional trips that had to be cancelled when his health began to fail last year. Tom is survived by his wife and best friend Gloria, his son Mark and his wife Linda, daughter Sharon Sowers and her husband Scott, and son Dennis and his wife Trisha. He will be lovingly missed by his grandchildren and their spouses, Eric Kelly and Lauren Adams, Nick and Nour Kelly, Cason Casey Kelly, Sarah and Sam Kerr, Kelly and Nick Swanson, Dylan and Rita Kelly, Meghan and AJ Hurst, Gloria Sowers, Emma Kelly, and his two Great Grandchildren, Jackson and Bennett Kelly. The family wants everyone to know that although they're in pain right now, they feel like they're the most blessed people on earth because they carry within them the spirit of Tom, Dad, Grandpa, Kelly. The family would like to extend their sincere thanks to all of those friends who have helped support us during this time. Everyone is invited to join us for a Visitation and a Prayer Service on Thursday, March 15, 2012, at 6:00 PM at Holy Cross Catholic Church, 3175 Hathaway Court, NE, Atlanta Georgia 30341. A funeral Mass will be celebrated at St. John Neumann Catholic Church, 801 Tom Smith Rd, Lilburn, Ga. 30047, on Friday, March 16, at 11:00 AM. Monsignor Richard Lopez will be the principal celebrant. Concelebrating will be Monsignor James Fennessy and Father John Howren. The family asks that anyone wishing to make a monetary donation in Tom's name, please do so to the St. John Neumann Catholic Church Chapter of the St. Vincent DePaul Society; or as Tom might have done, please give some hours to your favorite charity.