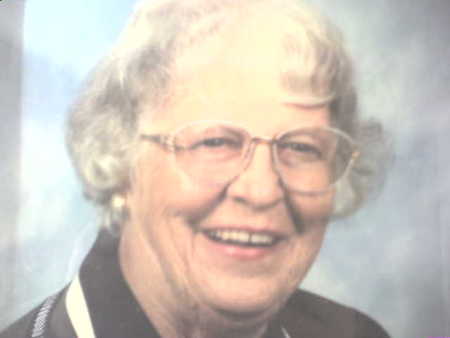 Born August 9, 1920 in Gaston County to Abel Levi Cline and Angie Rosabelle Bolik, she was the youngest of 16 children. As a young woman, she worked in Groves Thread Mill #3, but her life-long calling was as a nurturing daughter, mother, sister, aunt, grandmother and loving friend. She married James E. Kenny Kennington on July 14, 1942 at the parsonage of Flint-Groves Baptist Church, East Gastonia, NC, and lived in Charlotte with her husband's parents while he was in the Army during World War II. When Kenny was injured in the Philippines and transferred to a military hospital in Muskogee, OK, she moved there with her youngest son. On Kenny's recovery, they returned to Gastonia. As her husband's career blossomed, she lived in many cities: Gastonia, Raleigh, Greensboro, Charlotte, and Lumberton, NC; Birmingham, AL; Miami, FL; Detroit, MI; Columbia, SC; but she considered Charlotte her hometown. An avid sports enthusiast, she enjoyed golf and was a devoted baseball, football, tennis and basketball fan. She also enjoyed the challenges of difficult crossword puzzles and playing bridge. She loved to read and always had books and magazines nearby. Wherever she lived, she was active in her local church, most recently Providence Baptist Church in Charlotte. She is survived by her children James Sal of Burbank, CA, Gerald Jewel of Duluth, GA and Bruce Kathy of Newport News, VA; her grandchildren Tanya Price David of Gastonia, NC; and James Kennington of Newport News, VA; her great-grandson Ryan Price of Gastonia; and numerous nieces, nephews, and cousins. Predeceased by her husband James 2007 after 64 years of providing a shining example of a couple who were devoted to each other.