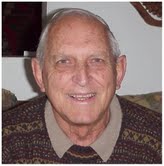 Roland J. Knobel Jr., age 87, died at his home Monday, August 16, 2010 of natural causes. Dr. Knobel was a retired Commander in the United States Navy, Professor Emeritus at both Georgia State University and Emory University and President of the Memorial Society of Georgia. He was preceded in death by his wife, Mary Jo Kishler Knobel and is survived by a daughter, Cathy Knobel McCann, son Brad Knobel, son-in-law Tim McCann and grandson Michael McCann. Roland J. Knobel was born on February 23, 1923 to Dr. Roland J. Knobel and Nora Seeman Knobel in Richmond borough, Staten Island, New York. He attended public schools and graduated from Curtis High School in 1941. He then joined the United States Navy as a seaman and served aboard the battleship USS Washington in both the Atlantic and Pacific theatres. In 1944, he qualified for officer training in the V-12 program and studied at DePauw University, Miami University of Ohio and Harvard Graduate Business School. After Officer Candidate School, he obtained his commission as an Ensign. In 1946, he married Mary Jo Kishler of St. Mary's, Ohio whom he had met at DePauw. Dr Knobel served in the Supply Corps of the Navy, including stations aboard the USS Kearsarge and USS Megara as well as in Washington, Guam, Naples, Philadelphia, Lakehurst and Rota, Spain. He received his Masters in Economics from George Washington University and his PhD in Medical Care Organization from the University of Michigan. "Knob" retired from the Navy in 1966 and came to Atlanta in 1970 as professor in the Health Administration Department at Georgia State University under Dr. Noah Langdale. He helped develop graduate programs in health administration, health ethics and economics and international health management. Later, in conjunction with CDC, he helped establish the School of Public Health at Emory University. After his retirement from Georgia State, he continued to teach part-time at Emory. Knob and Mary Jo loved traveling and did so all over the world Knob even went to Antarctica. He played tennis and croquet and enjoyed bridge and poker. He was active in civic associations and was deeply involved in the Unitarian Universalist Congregation of Atlanta UUCA and its long-lived 40s-50s group. He loved music and was a patron of the Atlanta Symphony. Cremation was by Wages and Sons. In lieu of flowers, contributions may be made to any one of the charities below, or to a charity of one's choice; Memorial Society of GA, Compassions and Choices, Georgia Public Television, The High Museum, Planned Parenthood, The Memorial Garden at the Unitarian Universalist Congregation of Atlanta or any of the universities mentioned above. Dr. Knobel also gave to dozens of organizations representing 1 health and well-being of people and animals, 2 education and culture, and 3 human rights. Memorial services will be held Sunday, October 31, 2010 at 2:30 PM at the Unitarian Universalist Congregation of Atlanta, 1911 Cliff Valley Way, NE Atlanta, GA 30329.