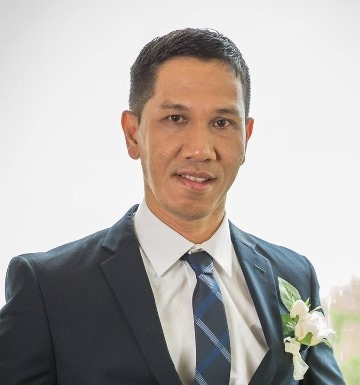 Luther Bebita Balcena, as affectionately called by his family and close friends as “Boyet,” passed away January 22, 2018 at his home in Lawrenceville, Georgia. His body is laid to rest for viewing on Sunday, January 28, between noon and 3:00 PM at Wages & Sons Funeral Homes & Crematories, 1031 Lawrenceville Hwy, Lawrenceville, GA. His funeral service will be held immediately after viewing at the same venue. Boyet was born on the 29th of December, 1978 in Rizal Pontevedra, Capiz, Philippines to Teresita and Lucibar Balcena as a healthy and playful baby who brought so much joy and blessing to his parents and four siblings – Leonardo, Luchie, Lorna, and Lucibar. As a baby in the family, he was “spoiled” with attention and showered with so much love. He grew up as a confident child and graduated as his class' Salutatorian in Rizal Elementary School. In high-school, he continued to excel in his classes both athletically and academically and graduated with honors and at the top of his class. He proceeded to college and earned a Bachelor’s Degree in Computer Engineering at Colomban College in Olangapo City under the loving parental guidance of his sister Lorna. He enjoyed sports and basketball was his passion. Everything about NBA captivated him and he loved to wear his favorite team’s apparel whenever he hanged out with friends. Boyet moved to United States in 2010 and loved his newly adopted country. He shared a house with his sister, Luchie; nephews, Sean and Jonathan; and niece, Shania. He was employed by Kyodo America Industries as Blow Mold Shift Lead. Seven months ago, on June 3, 2018, the greatest joy of his life came true when he joined hearts with Marizel Dumapig in Holy Matrimony. Boyet was a loving husband, friend, brother, son, and uncle to many people he touched during his lifetime. He is survived by his wife, Marizel; his siblings, Leonardo, Luchie, and Lorna; his mother, Teresita; and nephews and nieces. He will sorely be missed. Rest in peace, Boyet. We all love you.