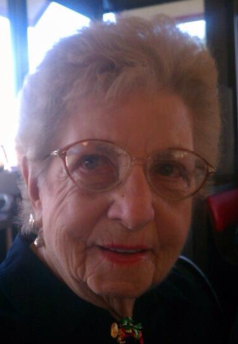 Mary Ellen Korom, age 90, of Lawrenceville, GA passed away April 4, 2015. Mrs. Korom was an active member of the Order of the Eastern Star in her native Ohio. She was preceded in death by husband William Korom and she is survived by sons Michael and his wife Diane Korom of Lawrenceville, GA, Charles and his wife Barbara Korom of Surprise, AZ; grandchildren Kyle (Brooke) Korom of Winder, GA, Tyler Korom of Canton, GA, Christopher (Sarah) Korom of Phoenix, AZ, and Michael (Rebecca) Korom of Dacula, GA; and 3 Great grandchildren William, Mary Beth, and Gracie Korom. Funeral services will be held on Thursday April 9, 2015 at 4 p.m. at Wages and Sons Gwinnett Chapel. The family will receive friends prior to the service from 3:30 until 4 p.m. Interment will follow at Canal Fulton (Union) Cemetery in Canal Fulton, OH. Online condolences may be expressed at wagesandsons.com. 770-277-4550