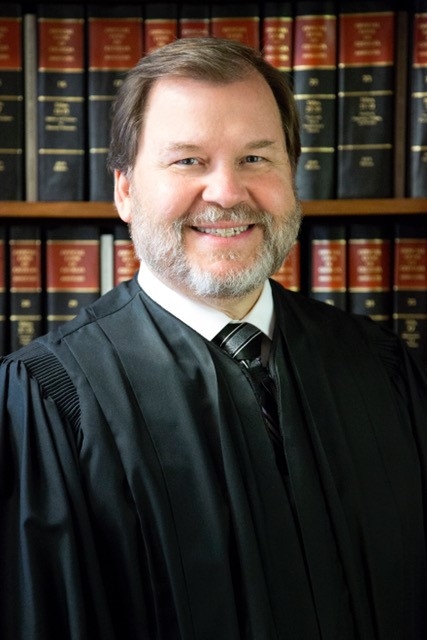 The Honorable Michael C. Clark (retired), passed away at age 65, on November 2, after a short but courageous battle with cancer. Judge Michael Clark was born and raised in Macon, Georgia to Cleveland Mack Clark Jr and Agnes Christine Sanders. Michael attended Mark Smith HS in Macon and continued his higher education at the University of Georgia.  Michael was a proud triple “Dawg” with a B.S in Psychology, A.B in Religion and Juris Doctor from the Georgia School of Law.  A confessed professional student and life-long learner, Michael continued studying for many years at the National Judicial College in Reno Nevada. Michael’s interests were in the humanities, especially Philosophy, Religion, History, Literature and Constitutional Law. Michael served for over 21 years as Superior Court Judge in Gwinnett County. He became a member of the bar in 1980, worked briefly as a law clerk in Floyd County, as an assistant district attorney in Gwinnett County, and as a lawyer with partner and best friend Joe McLaughlin before boldly opposing an incumbent judge to win a seat on the bench in 1992.  Before being elected to the bench, he had a reputation as an excellent trial and appellate lawyer. As a trial judge, he presided over approximately 150 jury trials and handled roughly 30,000 cases. He was the Administrative Judge of the Ninth Judicial Administrative District from July 2008- 2010.  In March 2014, he stepped down from the bench to return to private practice and was a registered mediator and arbitrator. Michael was known for his fairness, compassion, respect and quick wit in the courtroom. He was a brilliant scholar, with an infectious personality and magnetic smile.Michael was an educator and mentor to both judges and lawyers presenting often at conferences and in 2014 he was given a Leadership Medal from the Institute of Continuing Judicial Education. Michael’s hobbies included scuba diving, golf, baseball and college football, especially his beloved Georgia Bulldogs. He was an avid reader with a vast library. He enjoyed travel, especially cruising and visited 22 countries over the past 9 years with his wife. He had a love for the Mediterranean and Caribbean.  He was passionate about his dogs and volunteered his time with FAAP, Senior dog rescue in Winder and OTC, Off the Chain non-profit, freeing dogs from tethered conditions in Jackson and Barrow county. Michael also enjoyed raising money for the Leukemia and Lymphoma Society, completing a Century bike ride in Hawaii in 2007 and various road races in Atlanta. Michael loved the arts, especially theater and was a frequent attendee at performances at the Fox and the Lionheart theater in Norcross. Michael is survived by his beloved wife Lisa Clark (Dacula), daughter Katherine Clark(Dunwoody), step children Megan Droze (Summerville SC), Kevin Macdonald (Dallas TX), Ryan Macdonald (Duluth)who are Lisa’s children, along with step children Tara Nearman(Lawrenceville) and Ryan Kingston (Lawrenceville) of former wife Patti Guffey-Clark, (mother of Katherine Clark). He is also survived by brother Anthony Clark and wife Paula (Warner Robins) and grandchild Cody Droze (Summerville SC) and other extended family members. Michael will be remembered byfellow lawyers and judges and his many, many friends, in Gwinnett and in Macon as a kind hearted, caring man of the highest honor, courage, and wisdom.  He was a DGD! Damn Good Dawg!! In lieu of flowers the family asks that you kindly make donations to Michaels favorite non-profits and charities.  Senior dog shelter Frankie and Andys Place, www.frankieandandysplace.org, Off The Chain via the North Georgia Community Foundation, 615 Oak St Gainesville, GA and designate Off the Chain, or the Leukemia and Lymphoma society. A memorial service celebrating the life of Judge Clark will be held at the Infinite Energy Arena Tuesday, November 14, 2017 at 3:00 pm.