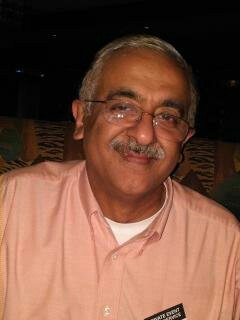 Naveen “PJ King” Narula, 60, of Alpharetta, Georgia, died October 9, 2016. He was born on March 20, 1956, in Bhuj, India, the son of Pushpa Narula and the late Harbhajan Singh Narula. A brilliant engineer, Naveen graduated from the Indian Institute of Technology Delhi in 1977 with a Bachelor’s in Electrical Engineering. He then earned a Master’s of Business Administration from the Indian Institute of Management Calcutta in 1979, and eventually an executive MBA from Georgia State University in 1990. He worked as a software engineer for Burroughs, a technical consultant and manager for Unisys and IBM, and a software architect at Macy’s. A lover of math, nature, photography, and "dad jokes", he was the embodiment of the American dream, climbing from being an immigrant with very limited means to a proud American citizen with a wonderful wife, Kavita, a beautiful home, and three grown children who were never in want. He leaves behind his mother, Pushpa Narula; his wife, Genevieve Forner Narula; his brothers, Sarveen and Praveen Narula; his children, Nishita Narula Morris, Gautam Narula, and Pranavi Narula; his granddaughter, Isabelle “Izzy” Morris; his stepchildren, Amy and Eli Forner; the mother of his children, Kavita Chhibber; and his German Shepherd, Snow White. A funeral service will be held from 4:00 P.M. to 6:00 P.M. on Saturday, October 15, 2016 at Wages and Sons Gwinnett Chapel, 1031 Lawrenceville Hwy., Lawrenceville, GA 30046. The family will receive friends from 2:00 P.M. to 4:00 P.M. at the funeral home. Online condolences may be expressed at www.wagesandsons.com