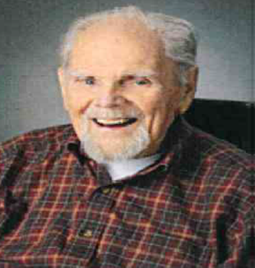 Paul Robert (Bob) Carling was born on April 11, 1917 in Glen Gardner, New Jersey. Bob and his family, parents Paul and Helen (Kendlehart) Carling, older brother, Bill, and younger sister, Catherine, moved to High Bridge, New Jersey where Bob attended school and graduated from High Bridge High School in 1934. He then went on to Gettysburg College in Gettysburg, Pennsylvania graduating in 1939. He went to work for Chevrolet Division of General Motors (GM) in Tarrytown, New York before his work there was interrupted by World War II. He went through officers training and was commissioned a 2nd lieutenant. Before being sent to Europe he met and married Helen Weaver in Atlanta, Georgia on January 21, 1945. He then served in Austria for fourteen months in the cities of Linz and Wells. Upon discharge at the end of the war, he and Helen returned to Tarrytown and started to raise a family. There three children were born: Robert Weaver, William Paul, and Karen Louise. In 1956, Bob was transferred to General Motors’ central office in Detroit, Michigan. A few years later, when the GM Technical Center was opened in Warren, Michigan, Bob was transferred there. In 1966, GM had him move again, this time to the Lakewood assembly plant in Atlanta, Georgia where he served as the plant comptroller. Following his tenure at Lakewood he also held the comptroller position at the Doraville assembly plant in Doraville, Georgia. Bob retired from GM in 1980. In retirement, Bob enjoyed woodworking, making toys for grandchildren, and was an avid gardener. He also traveled extensively with son Bob and Bob’s wife, Sue, as well as with his other children and their spouses, Bill (Brenda) and Karen (Bob). His travels included revisiting Linz and Wells, Austria where he was stationed during WWII, trekking with penguins in Antarctica, a safari to Kenya and Tanzania, and touring London, Paris, Rome, Florence, and other European cities. His final trip with his children was to the islands of the Galapagos. A particularly memorable event in Africa was riding in a hot-air balloon over the Kenyan savannah as the sun was rising and the hippos below were returning to the river. He was preceded in death by his parents, siblings, and his wife Helen who died in 1974. He is survived by his children Bob (Sue) of Livermore, CA, Bill (Brenda) of Birmingham, AL, and Karen (Bob) of Tucker, GA; grandchildren Steve Carling (Piper) of Seattle, WA, Matt Carling (Stacy) of Laramie, WY, Chris Carling (Kristy) of Alameda, CA, and Mike Byers (Elise) and Jason Byers (Anna) both of Snellville, GA, Haley Webb, and Leigh Ann Webb both of Birmingham, AL ; and great grandchildren Demri and Noa Carling of Seattle, WA, Andrew and Sevita Carling of Laramie, WY, Samantha, Oliver, and Kathryn Carling of Alameda, CA, and Scarlett Byers of Snellville, GA. All members of his family were on hand to celebrate his 100th birthday. Bob passed away of natural causes on April 26, 2017 just a couple of weeks after reaching 100 years of age. In lieu of flowers please make contributions to breast cancer via Susan G. Komen 3525 Piedmont Road NE, Building 5, Suite 215, Atlanta, GA 30305