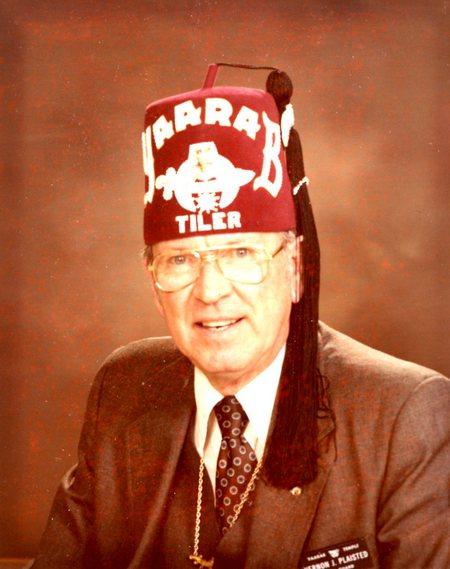 Plaisted Vernon Jay Plaisted, age 93 of Stone Mountain, passed away Saturday March 9, 2013 at his residence. Born in Willoughby, Ohio on August 4, 1919; he was the son of the late Roy Lynn and Hazel B. Plaisted. He is preceded in death by his wife of 63 years, Marjorie Dixon Plaisted; whom he married on August 11, 1945; his brother Leo Plaisted, and grand son-in-law Jerry Dean Hillman. Vernon joined the U.S. Army April 1, 1941. He was a Sergeant Major stationed at Camp Stewart, GA, where he and Marjorie met. During his time of service he received the following medals: WWII Victory, Good Conduct, American Service, and American Defense Service Medals. He received an honorable discharge on February 2, 1946, and remained in the U.S. Army Reserves until July 14, 1950. Raised a Master Mason in Sam Davis Lodge # 661 in Smyrna, TN in 1952; became a Scottish Rite Mason, and was created a Shriner in Yaarab Shrine Temple in 1968. He was Past President of the Arab Guard Unit; Past President of Yaraab Golf Association; served as Tiler of Yaraab Temple for 8 Potentates; served with Hospitalers Birthday Committee and Family Night Committee for many years. Vernon retired from the U.S. Housing and Urban Development Department in 1980 with 35 years of service. During retirement Vernon loved spending time with his family and found time to volunteer at DeKalb Medical Center for over 15 years. He was a member of First United Methodist Church in Decatur. When it comes to setting an example, Vernon was a model for everyone. Each of us is a better person for having known and been associated with Vernon. He is survived by sons Alynn Jay Sandra Plaisted and David Vernon Melissa Plaisted; grandchildren Kimberly Plaisted Hillman, Stephen Dana Plaisted, Aaron Heather Plaisted, Matthew Jodi Plaisted, and Amanda Plaisted Daniel McGaughey; and 8 great grandchildren. He is also survived by a brother-in-law Bryant Dixon, and several nieces and nephews. Funeral services will be 11 a.m. Monday March 11, 2013 at Wages and Sons Stone Mountain Chapel with Dr. Lamar Holley officiating. Interment will follow at Floral Hills Memory Gardens in Tucker, GA; with Masonic graveside services conducted by Knights of Mecca. The following gentlemen will serve as Pallbearers: Hunter, Aaron, Matthew, Stephen, and Caleb Plaisted, Daniel McGaughey, and Javier Repetto, and the Arab Guard will be serving as Honorary Pallbearers. Music selections will be handled by Julie Donald and Tracy Malone. In lieu of flowers, the family requests donations be made in honor of Vernon Plaisted to the Shriners Hospital for Children, Arab Guard Unit, Yaraab Shrine Temple, 400 Ponce de Leon Ave NE Atlanta, GA 30308.