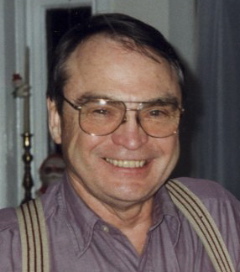 Leslie Y. Pounds of Atlanta, died on January 6, 2012. Born in Stone Mountain on January 23, 1935 to J. C. and Pauline Minor Pounds, he lived most of his life in Atlanta. Leslie graduated from Stone Mountain High School and the University of Georgia. He was an Eagle Scout and played the saxophone in the Redcoat Marching Band. He made his career in public safety, working for the Food and Drug Administration, the Consumer Product Safety Commission and the United Nations Food and Agriculture Organization. He was active in the Morningside Lenox Park Association and Atlanta Public Schools. Leslie was an active member of All Saints Episcopal Church for more than 30 years where he served on the Vestry, was Junior Warden, Verger, Eucharistic Minister, Lector, and Docent. He is survived by his wife of 52 years, Beverly Davis Pounds, daughters, Jennifer Pounds and Tricia Ekholm, son-in-law, Chris Ekholm, grandson, George Leslie Ekholm, sister Mary Harper and extended family. The family will receive friends at Wages & Sons Funeral Home in Stone Mountain on Wednesday January 11, 2012 from 4 to 7 pm. A memorial service will be held at All Saints Episcopal Church in Atlanta on Thursday, January 12 at 11 am, interment to follow. In lieu of flowers and to honor Leslie's passion for the arts, the family requests that donations be sent to the All Saints Choir www.allsaintsatlanta.org, Atlanta Ballet www.atlantaballet.com, or Spivey Hall www.spiveyhall.org in memory of Leslie Y. Pounds.