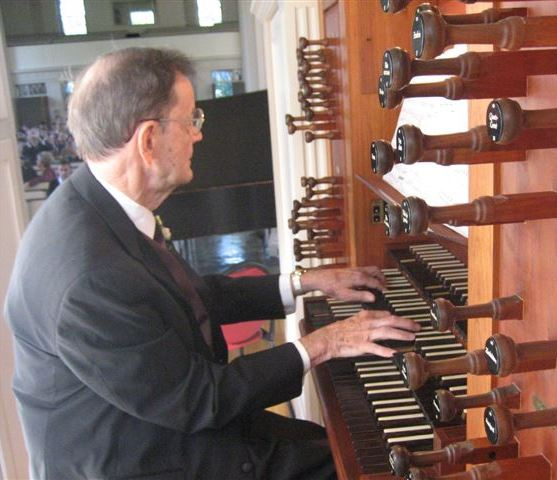 Raymond Jones Martin passed away at home in Athens, Georgia on November 10, 2018, at the age of 97. Dr. Martin was born on November 5, 1921 in Lumberton, NC to physician James A. Martin and church organist Mary Jones Martin. He is preceded in death by his wife of fifty-five years, organist Lois Jean Floyd Martin, and his older brother, Dr. James A. Martin, Jr., professor emeritus of religion at Columbia University. Dr. Martin is survived by his three children: Raymond J. Martin, Jr. (Elsie Martin), Minneapolis; Floyd W. Martin (Becky Martin), Little Rock, AR; and Jean F. Martin-Williams (Moffatt Williams) of Athens; five grand-children: Langdon James Martin (Anna Martin), Swannanoa, NC: Celia Martin Mejía (José Agustín Mejía Camacho), Minneapolis; Mary Rebecca Martin, Omaha; Katie Sue Martin-Williams, Athens; and Grier M. Martin-Williams, Athens; and four great-grandchildren: Elizabeth Cerelia and Lucille Sophia Martin, Swannanoa; and Raymond Francis Mejía Martin and Grace Elsie Mejía Martin, Minneapolis. His family remembers him as a man with a patient, kind and gentle spirit, and an infectious sense of humor. He was a dedicated father, always supportive of, and interested in, the careers and experiences of his children, grandchildren, and great grandchildren. He had a strong Christian faith that guided all his actions in life. Dr. Martin was educated at the University of North Carolina at Chapel Hill; the Institute of Musical Art, Juilliard School of Music (Bachelor of Science, 1942); and the School of Sacred Music, Union Theological Seminary (Master of Sacred Music, 1948 and Doctor of Sacred Music, 1963). When he enrolled in the Juilliard School in the summer of 1940, he sang in the chorus where he met fellow organ student, Lois Jean Floyd of Dallas, Texas. Many years later, after the old Juilliard building had been bought by the Manhattan School of Music, their daughter had many orchestra rehearsals in this same room. Upon graduation from Juilliard, Dr. Martin enlisted in the United States Naval Reserve, serving for four years as a Chaplains’ Assistant (Chief Welfare Officer). This included two years in Guantanamo, Cuba and two years at the Naval Medical Center in Bethesda, MD. As a Chaplains’ Assistant, Dr. Martin provided the music for Protestant, Catholic, and Jewish services. Church service music he recorded for use on ships was used throughout the Navy, including a ship on which his brother was serving as a Naval Chaplain. Dr. Martin and Lois Jean Floyd were married in 1945 and returned to New York to pursue further graduate study. From 1948 to 1950, Dr. Martin was on the faculty and College Organist of Brenau College in Gainesville, GA. During this time, he was a regular performer in Athens as part of the Thursday night concert series organized by Professor Hugh Hodgson. In 1950 he began a thirty-seven-year career on the music faculty of Agnes Scott College where he also served as College Organist. He liked to quip that alumnae of the college knew the back of his head due to the positioning of the organ in the auditorium. His students remember him both as an excellent teacher and also for his caring and guidance during sometimes difficult college years. From 1950 to 1960, he was the staff organist for the Protestant Radio and TV Center. After ten years as the organist/choirmaster of Peachtree Presbyterian Church, Dr. Martin was named organist/choirmaster of The Lutheran Church of the Redeemer (Atlanta) in 1963. He served as Dean of the Atlanta Chapter of the American Guild of Organists and served that organization for many years. He retired from Redeemer in 1993 and continued as an active substitute there and at other area churches. After the death of his wife in 2001, he became active in the Decatur Rotary Club and at Redeemer he served as a Stephen’s Minister and in various outreach ministries, including the Food Ministry, the Library Committee, and the Prayer Ministry. In 2006 he moved to Athens and joined Holy Cross Lutheran Church, where he was active as a musician, care team member, and instructor. He was also a member of the Athens Rotary Club, a teacher for the Osher Lifelong Learning Institute, a volunteer music textbook reader for Learning Ally, and a regular attender of concerts at UGA. A memorial service will be held at First Presbyterian Church, Athens, on December 10 at 2:00 pm. Family visitation will be held at Holy Cross Lutheran Church, Athens, on December 9 from 3:00-5:00 pm. In lieu of flowers, the family requests donations to: Holy Cross Lutheran Church (Athens, GA), the “Ray Martin Organ Fund” at the Lutheran Church of the Redeemer (Atlanta), or the “Professor Raymond Jones Martin Expendable Scholarship” fund at Agnes Scott College. In lieu of flowers, the family requests donations to: Holy Cross Lutheran Church (Athens, GA), the “Ray Martin Organ Fund” at the Lutheran Church of the Redeemer (Atlanta), or the “Professor Raymond Jones Martin Expendable Scholarship” fund at Agnes Scott College.