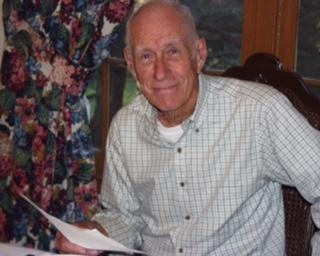 Larson, Stanley A. Stanley A. Larson was surrounded by his family as he passed away peacefully at Hospice Atlanta in the early evening on Friday, August 7th, 2015. A funeral mass will be held at 11:00 a.m. on Monday, August 17th, at Corpus Christi Catholic Church in Stone Mountain. Stan, a native of the Bronx, NY, was born to Arthur and Mary Bertha Larson on June 9th, 1924. He graduated from St. Simon Stock School before enlisting in the Army Air Corp in 1942. Upon his return from Europe, he attended Iona College on the GI Bill, graduating with a degree in finance. He was an executive for Texaco Oil Company, working at the Chrysler Building in New York until 1971, when he was transferred to Atlanta; he retired in 1980. He began his 65-year marriage to Maryannette Reddy on September 17th, 1949. Stan was a devoted and beloved husband, father, grandfather and friend. Like many men of his generation, he was steadfast with a deep sense of duty and integrity. Stan was especially known for his quick wit and love of tennis, the family’s dogs, the outdoors and his Church. He was an exceptional athlete having been captain of his high school basketball team and pitcher for the baseball team. He was asked to try out as pitcher for the NY Yankees in 1941. Stan took up tennis as an adult, and that became one of his lifelong passions. He was a regular player at DeKalb Tennis Center after retiring and is remembered for being a gentleman both on and off the court. Stan is survived by his wife, Maryannette, five children — Catherine Larson (husband Tim Bryson), Anne Marie Hall (husband Frank), Joseph Larson, Janet Brown (husband Chris), Mary Beth Buck (husband Alex) — and six grandchildren — Genna, Tim, Gavin, Emmy, Addy, and Eiler. In lieu of flowers, donations may be made to St. Simon Stock School. Write Stanley A. Larson Scholarship Fund on the memo line and mail to St. Simon Stock School, 2195 Valentine Avenue, Bronx, NY 10457.