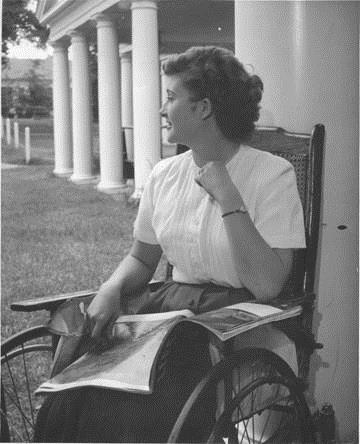 Suzanne Gill Miller passed away May 10th, 2016 at the age of 83. Suzanne was born February 9th, 1933 in Pittsburgh, PA to the late Frank Corydon Gill & Margaret Swindell Gill. She was raised in Fairfield, NC and Wilson, NC. At the age of 15, Suzanne was dealt a setback as she was a part of the “polio epidemic of 1948” and was paralyzed, losing the use of her legs. She spent the next six months in a hospital in Portsmouth, VA before coming to Warm Springs, GA for the next 18 months. Her time at Warm Springs prepared her for life without the use of her legs. She saw other patients at Warm Springs that were in far worse shape than she was and she left prepared to rise above anything. She returned home to Wilson NC and finished High School graduating in 1951 and continued her education at Atlantic Christian College graduating in 1955. In 1956, she was working as a school teacher in Wilson, NC when she met the love of her life, Dick Miller of Woodstock, VA. Dick Miller was playing pro baseball for the minor league team located in Wilson when they met at the ballpark. They soon married and started a family. Suzanne & Dick lived in North Carolina, Virginia and Florida before they moved to Dunwoody, Georgia in 1970. They became faithful members of Kingswood United Methodist Church and became involved in everything from little league sports at Murphy-Candler park; swim & tennis teams at Kingsley Swim & Racquet Club and Peachtree High School football. Suzanne was the team mom for not just some of the teams, but all of the teams that her kids were a part of. Suzanne and Dick were strong supporters of the University of Georgia and the University of North Carolina. They were season ticket holders for UGA football since the 1980’s and those Saturdays in Athens were truly special. Suzanne will be remembered as the most loving woman you could ever meet. She lived life to the fullest and was a wonderful daughter; sister; wife; mother; grandmother; and great friend to all the people that she touched throughout her life. Our greatest memories of Suzanne are tied to those decades living in Dunwoody and the wonderful relationships made along the way that made all of our lives so special. Suzanne Miller was preceded in death by her parents; her husband, Dick Miller; and her youngest sister, Helen Gill Keasler. She is survived by two daughters, Meg Miller & Lisa Britton; a son, Rick Miller and his wife, Stephanie Miller; two grandchildren, Brooke Miller & Jake Miller; a sister, Nancy Scott; and a brother, Frank Gill. Memorial Service to be held Saturday, June 4th at 2pm at Kingswood United Methodist Church, 5015 Tilly Mill Road, Dunwoody, Georgia 30338. Visitation with the family to follow the service in the Fellowship Hall at Kingswood. In lieu of flowers, please make contributions to Kingswood United Methodist Church or to the Easter Seals Foundation in honor of Suzanne Miller.