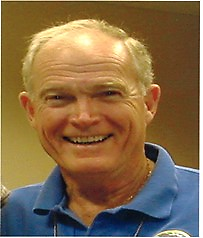 William Kenneth (Bill) Spaulding, aged 92, went peacefully to his much-deserved rest on March 30, 2022.
Born January 27, 1930, Bill was the fifth of the six children of Basil and Elizabeth Spaulding. He grew up in the sea air of Brunswick, Georgia and graduated from Glynn Academy in 1948. After graduation, Bill enlisted in the Army during the Korean War and served with the 5th Infantry in Japan until his discharge in 1952. After returning stateside, he enrolled at the University of Georgia, beginning his lifelong devotion to the Dawgs.
Bill graduated from the School of Business in 1955 and went to work at Southern Bell in Atlanta in accounting. It was there that he met his wife of 65 years, Jane Autry of Stone Mountain, Georgia. They married in November of 1956, and over the next 36 years, traveled together as Bill helped to usher in the computer era at Bell. They relocated their home and family to several cities outside of Atlanta – Savannah, Macon, and Miami, – until permanently settling in Dunwoody, Georgia in 1977. Bill retired as an AT&T executive in 1991 but didn’t slow down – he was very active in the Telephone Pioneers, serving as president twice and volunteering for countless charitable causes.
A man of deep faith Bill was dedicated to serving his church, putting his piano and singing talents to work as a choir director and directing his executive talents to helping keep the churches operating in their service to God.
Bill was a lifelong gardener with an extraordinary green thumb. He had a particular love for his azaleas and dogwoods, spending countless hours tending them. When not in his yard, he could be found on his sailboat enjoying a refreshing breeze on the water that was so much a part of his life or on the beach at Captiva Island where he passed on his love of the ocean to his grandchildren.
Bill is survived by his loving wife, Jane, by their three children – Rusty (Lesley,) Summer, and Scott (Shelia) – by four grandchildren – Adam (Kelsey) Lindsay Mason (Steven) Amanda Densmore (Blake) and Mitchell – and by four great-grandchildren.
He will be missed more than words can express, and everyone he touched is richer for the time he walked this Earth. In celebration of Bill’s life, a memorial service will be held April 23, 2022 at Dunwoody United Methodist Church at 11.00 am, with a reception to follow at the church.