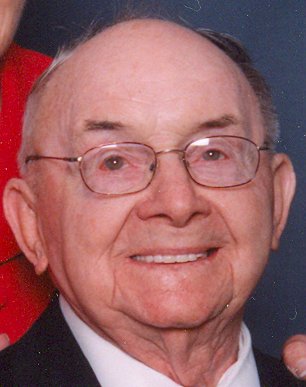 Donald Young Williams, age 90, of Lawrenceville passed away on June 12, 2012. He was born on May 28, 1922 to Frank Young Williams and Maude Hamrick Williams of Lawrenceville, Georgia. He was born and raised in Gwinnett County, he managed the Farmers Mutual Exchange, an agricultural supply cooperative, in both Lawrenceville and Gainesville. He retired from the parent company, Gold Kist Corporation. A life-long Presbyterian, he was the oldest living member of Fairview Presbyterian Church, Lawrenceville, GA. In his faithful service, he had been a deacon and Elder at both Fairview Presbyterian and at First Presbyterian of Gainesville, GA. He delighted in his role for many years as the caretaker of the rose garden at Fairview, as had been his mother and sister before him. He was a veteran of World War II and would still recant stories of the various airplanes he flew on and the many adventures of his days in service. He was truly proud to be an American. His happiest days were spent on his John Deere tractor, where he said he could always look back and see what he had accomplished and feel at peace. He was preceded in death by his wife, Doris Long Williams; wife, Carolyn Deaton Williams; his parents; two sisters and three brothers. His survivors include his daughter, Hope Williams of Alpharetta, GA; son, Phil Williams and his wife, Sallie of Chelsea, AL; grandson, Austin Williams and his wife, Callie of Titusville, FL; great grandchildren, Baleigh and Riley Williams of Titusville, FL; step-daughter, Dianne Waldrip and her husband, Jimmy of Lawrenceville; sister in law, June Egan Williams of Chicago, IL; and a number of loving nieces. He was the most proud of his family – and many times, his parting words were, "I'm proud of you." Funeral services will be held on Saturday, June 16, 2012 at 11 o'clock at Wages & Sons Gwinnett Chapel with Rev. Chip Blankinship officiating. Interment will be at Fairview Presbyterian Church Cemetery in Lawrenceville. In lieu of flowers donations can be made in his memory to Anna Craig Cemetery Fund, c/o Fairview Presbyterian Church, 857 Duluth Highway, Lawrenceville, GA 30043. The family will receive friends on Friday from 2 o'clock until 4 o'clock and from 6 o'clock until 8 o'clock at Wages & Sons Gwinnett Chapel, 1031 Lawrenceville Highway, Lawrenceville, 770-277-4550. Online condolences may be expressed at www.wagesandsons.com.