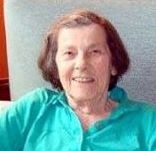 DRISCOLL, Dorothy Van Aernam Mrs. Dorothy Driscoll died peacefully at home with her family on Monday, February 20, 2017 at age 91 in Stone Mountain, GA. Mrs. Driscoll grew up in Buffalo NY, and was a 1943 graduate of the Buffalo Seminary where she made lifelong friends who grew up together, had children together and shared their lives with weekly phone calls after moving became part of life. She married David Driscoll a World War II veteran of the U.S. Marine Corps, who predeceased her in 2006. They lived in a number of places including Buffalo NY and Stamford CT where they raised their family. Dorothy was a loving Mom who was always active in her family’s activities: warming up her pitchers, teaching the Latin Mass to her altar boys, training her ballerina, and making lopsided birthday cakes. In their loving 59-year marriage Dorothy and Dave raised four children, shared a daily cocktail, and traveled the world. Mrs. Driscoll is survived by her four children and spouses: Terence and Cynthia Driscoll, Atlanta, GA; Dennis Driscoll, Columbus, OH; Carolyn and Paul Coffey, Boston, MA; Thomas Driscoll, Valhalla, NY; by grandchildren Peter, Emily, Julia, Meredith and Erin. She also leaves Shadaea Francis, her caregiver and friend of six years. A celebration of Dorothy’s and Dave’s lives will be held this summer for family and friends in Buffalo NY at a yet to be determined date. Dorothy loved her life, her husband , her children and her many friends. She was much loved in return and will be greatly missed.