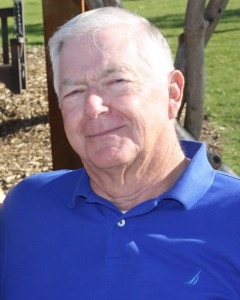 Edward Robert Evans Jr. of Richmond, Virginia passed away on Tuesday, April 18, 2017. He is survived by his wife Linda of 53 years, and his three children and their spouses. His daughter, Lauri Evans Pancer (Stuart). His sons, Scott Evans (Donna), and Greg Evans (Angela). Ed was the only brother to five sisters who loved and adored him. Janet Floyd, who preceded him in death. Linda Connor, Faye McCarron, Becky Williams, and Betty Burton. Ed’s greatest joy and pride was his six grandchildren. Brennan and Brandt Pancer. Logan and Elliott Evans, and Madelynn and Tanner Evans. Visitation for family and friends will be held on Friday, April 28, 2017 at 11:00 am followed by a memorial service in the chapel at 12 o’clock noon. Wages & Sons Funeral Home, 1031 Lawrenceville Hwy., Lawrenceville, Georgia. In lieu of flowers, donations can be made to Peachtree Christian Hospice, Duluth, Georgia.