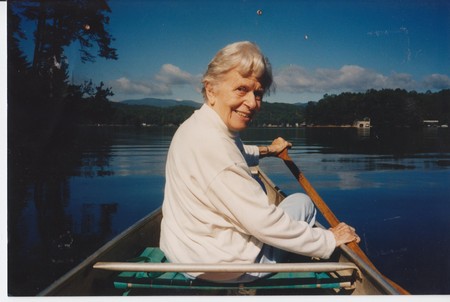 Ferguson, Janet, Former Civil Rights Activist, Pioneering Woman in Radio News Janet Ferguson, born Janet McCormick Chatten, a civil rights activist in Atlanta in the 1950s and 1960s and a pioneering woman in radio news who wrote Mike Wallace's shows for the Air Edition of the Chicago Sun in the late 1930s, died of natural causes in Atlanta on October 1, 2012. She was 97. Janet was born in 1915 in Chicago and grew up in Winnetka, Illinois. . She married Harry George Boyte in 1944, after their meeting in North Africa during WWII while both were working for the Red Cross. She and Harry had two children. Harry Boyte later became known for desegregating the Atlanta Red Cross as its manager in the 1950s, and served as a Special Assistant to Martin Luther King from 1963 to 1966, the only white person on the executive committee of the Southern Christian Leadership Conference. Janet staunchly supported this work in the face of considerable opposition from family and neighbors. She also took leading roles in the civil rights movement in her own right as one of a handful of white women in the South outspokenly opposed to segregation in the 1950s. She led successful efforts to desegregate the Atlanta League of Women Voters and the Atlanta public libraries and served on the board of the Georgia Council of Human Relations. She also organized the city-wide interracial Y-teen group while on staff of the Atlanta YWCA, which toured the South performing their play on desegregation. Her public involvements dated from her college days at Denison University in Ohio, where she obtained her undergraduate degree, and graduate school experiences at the London School of Economics and at Northwestern University, where she obtained her master's degree in journalism. In addition to her position as a radio news editor, Janet Chatten served as an editor for Scholastic Publications in New York before joining the Red Cross in World War II. She continued to write throughout her life, starting a newsletter for volunteers with the Atlanta Red Cross, founding the St. John Drum newspaper in the Virgin Islands, where she and Harry lived from 1973 to 1976 before his death in 1977. In East Lake Commons, a co-housing community in Decatur, Georgia, where she moved in 1999, she founded the community's Dancing Fox News. In 1983 she married Dwight Ferguson, a long-time leader of the Atlanta Friends. In 1987 they moved to Highland Farms in Black Mountain, North Carolina. After Dwight's death in 1991, Janet moved back to Atlanta, serving as secretary and in many other roles for the Atlanta Friends Meeting. In her eighties she co-authored A Way Opened, the history of the Meeting. Janet Ferguson is survived by her son Harry Boyte, her daughter Anne Boyte, her grandchildren Craig Boyte, Jae Ramirez, Luke Truan, and Rachael Frank, a great grandson, Erik Truan, three stepdaughters Joanne Clements, Audrey Doehne, Carol Turner, and their families. Memorial gifts should be sent to the Atlanta Friends Meeting. A memorial service to celebrate Janet's life will be held at the Atlanta Friends Meeting on October 27, at 11 am, 701 West Howard Ave., Decatur GA 30030. In lieu of flowers, donations can be made in Janet Ferguson's name to the Atlanta Friends Meeting.