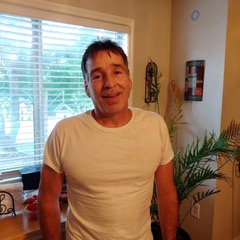 Gary was born January 16, 1966 in Atlanta, Georgia to Linda and John Smith. He was one of
five children. Growing up, Gary could be found riding bikes by the train tracks with his brother
Gene and best friend Michael Peacock, visiting with his Aunt Kitty, and framing houses with his
brothers Anthony and Gene in his teenage years. He attended Roosevelt High School and
obtained his master plumbing license with his brother Steve following high school. Gary
worked for Wade Construction for 15 years before pursuing a self employed career in
plumbing.

Gary was the kind of man who would fix anything for anyone, would make his wife’s coffee
every morning, and would always be there to protect his family. He was married to the love of
his life, Jammie, for 29 years and had a beautiful daughter, Megan, and a son, Jonathan. He
loved watching birds in the mornings from their kitchen window, fishing, being a dog dad to his
pug Abby, and watching wrestling every night with Megan. His life long dream was fulfilled
when he met famous wrestler, Rick Flair, and couldn’t help but tell everyone he knew. Gary
loved building with his hands and could fix almost anything you needed. He was the handiest
man around.

Gary is survived by his loving wife Jammie, two children, Megan and Jonathan, his siblings
Carolyn, Anthony, Steve (Carol) and several special nephews and nieces. He was preceded in
death by his parents Linda and John, his brother Gene, and his Aunt Kitty.
We rejoice that Gary is at peace and know that our lives are better for having had him in them.
He is always looking down over his family and protecting them still. Gary will be greatly missed
but always in our hearts until we meet again.