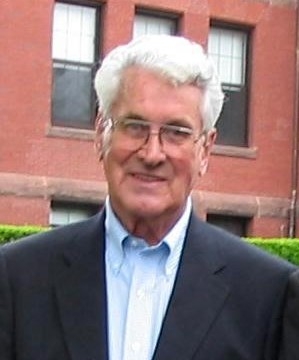 Gordon E. Robie was born on July 19, 1923 to parents Edison and Nancy Robie in Londonderry, NH and died at age 94 at the Park Springs Retirement Community in Stone Mountain, GA on May 4, 2018. Gordon met his wife, Jacqueline (Jackie) Cassidy Robie, at Pinkerton Academy, in Derry, NH, from which he graduated in 1941 and she graduated in 1944. They enjoyed 61 wonderful years of marriage from 1944 until she passed away in 2006. Together they raised three children, then were grandparents to four grandchildren. Later, Gordon also became a great grandfather to two great grandchildren. Gordon was kind and loving to everyone in the family; they will honor his memory and miss him greatly. Gordon’s highly-accomplished career included serving as a First Lieutenant in the Army Air Force during World War II. As a pilot in the Indo-China-Burma Theatre, he flew missions over the Himalayas (the “Hump”) from India to China. For his service, he was awarded the Distinguished Flying Cross and the Air Medal; in addition, he received the World War II Victory Medal, the American Campaign Medal and the European American Middle Eastern Campaign Medal. Gordon began a 35-year career with the Graybar Electric Company in Manchester, NH shortly after he returned from the war. Over that time, he and his family moved from New Hampshire to Maine, Connecticut, Kansas, Massachusetts and Florida. By his retirement, Gordon had risen to become Graybar’s Northeast Regional Director and to serve on the company’s Board of Directors. After retirement, he and Jackie lived happily in Tampa and Miami, FL as well as in Hayesville, NC, where they were members of the Episcopal Church of the Good Shepherd and enjoyed golf, gardening and family activities. After 2006, Gordon lived at the Park Springs Retirement Community, where he met Margaret Lowe, a loyal, kind and helpful friend. The Park Springs staff also provided Gordon with warm, caring and much-appreciated assistance during his stay there. Gordon is pre-deceased by his parents - Edison and Nancy Robie, his wife - Jacqueline Cassidy Robie, two of his four brothers - John Robie and Walter Robie, and his sister - Hazel Hamlett. Two brothers survive Gordon - William (Bill) Robie, of Exeter, NH and Robert (Bob) Robie, of Concord, NH; as do three children - Bruce Robie of Miami, FL, Brian Robie of Atlanta, GA and Brent Robie of Malden, MA. Also surviving him are four grandchildren - Clara Delamarter, of New York, NY, Benjamin (Ben) Robie of Atlanta, GA, Lauren Robie of Punta Gorda, FL and Nicholas (Nick) Robie of Miami, FL – and two great grandchildren, Merritt Delamarter of New York, NY and Fay Alonso of Punta Gorda, FL. A Memory Sharing will be held in the Pebblebrook Community Room, 5610 New Bermuda Road, Stone Mountain, GA 30087 at 10:00 a.m. on Saturday, May 26. At 4:00 p.m. the same day, a Memorial Service and Conferment will be held at the Episcopal Church of the Good Shepherd, 405 Herbert Drive, Hayesville, NC 28904. Later, on Saturday, July 21 at 10:00 a.m., a Memory Sharing will be held at the Pinkerton Academy Alumni Hall, 5 Pinkerton Street, Derry, NH 03038. In lieu of flowers, please send donations to Disabled American Veterans (www.dav.org) or to Pinkerton Academy at the Pinkerton Academy Alumni Center, 5 Pinkerton Street, Derry, NH 03038.