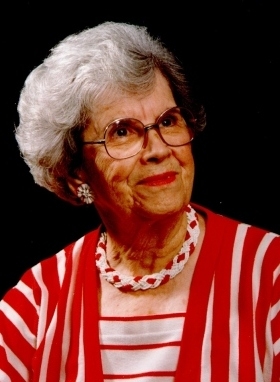 Mary Caroline Hill Guiney – 102 Born June 29, 1912 in McKeesport, PA to Hiram R. and Martha Rigby Hill; went to her eternal rest January 30, 2015. Mary graduated from Slippery Rock State Teachers College (PA) in 1932, at the height of the Great Depression, and since there were no teaching positions available, she went to work for G. C. Murphy Co. in Pittsburgh where she met the love of her life, Larry Guiney. They married in 1937, and moved to Ripley, WV in 1947 to open a business, and where they raised their two daughters, Rigby and Carolyn. In 1950, at the request of the City Council, Mary established the first library in the County, and in 1952 she was employed by the West Virginia Library Commission, first as a Bookmobile Librarian traveling to rural areas of the state to provide books to those with no access to traditional libraries. In 1956 she was promoted by the Commission to State Acquisitions Librarian at the Capitol in Charleston where she worked for the next 16 years, traveling an 80-mile round trip every day. Following her husband’s death in 1969, she stayed at the Commission until 1972 when she took early retirement to move to Georgia to join her children and grandchildren. Mary settled in Lawrenceville, where she lived in her own home until she was 97, at which time she lost her vision to macular degeneration, and moved to the home of her daughter and son-in-law in Decatur. Prior to then, she worked as a Media Clerk for B. B. Harris Elementary School. After she retired from this second career, she continued to volunteer at Lawrenceville and Dyer Elementary School Libraries until she was 96 years old. Mary was a life-long Episcopalian, and a member of St. Edwards Episcopal Church in Lawrenceville for the last 43 years. She was an emeritus member of Eastern Star and Gwinnett County Retired Educators Association, and a former member of Ripley Women’s Club and Lawrenceville Business and Professional Women’s Club. She enjoyed time spent with family, lunches with her Red Hat and Lunch Bunch groups, travel, shopping, music and reading. The key to her long life was her love of people. She was preceded in death by her parents, 3 brothers and 3 sisters, husband, son-in-law Bob Fetner, and great-grandson Doug Vosburgh. She is survived by her daughter and son-in-law, Rigby and Jack Duncan (Decatur), and daughter, Carolyn Fetner (Lawrenceville). Also survived by grandchildren David Rocker (Atlanta), Carolyn (Lyn) and Steve Pharris (Columbus), Laura and Chuck Shiver (Cane Hill, AR), Amber Fetner and Phillip Miles (Athens), Jack Duncan, Jr. (Lawrenceville), Steve Duncan (Norcross), Patti and Butch Vosburgh (Roswell); great-grandchildren Drew Rocker, Calvin Fetner, Lila Rigby Miles, Melissa and Andy Gallagher, Emily Duncan, Grant Vosburgh, Jessica and Jesse Rhodes, Brian and Kristi Shiver, Sara Shiver; great-great grandchildren Kaleb, Natalie, Caitlin, Isaac, Lily, Mark, Christopher, Brianna and Shyanne. Mary has requested that in lieu of flowers, donations be made to G.C.R.E.A. Scholarship Fund, 245 Chandler Court, Sugar Hill, GA 30518, or St. Edwards Church, 737 Moon Rd., SW, Lawrenceville, GA 30046. A memorial service celebrating the life of this remarkable woman will be held on Saturday, February 14 at 2:00 p.m. at St. Edwards Episcopal Church, 737 Moon Rd., SW, Lawrenceville, followed by a reception in the church fellowship hall.