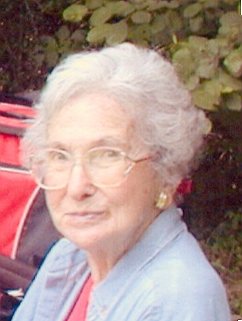 On the evening of March 16, 2010 a force of nature, Martha Weissman, age 95, died. This spark plug; this perpetual motion machine was, in her life, a Cub Scout leader, a Worthy Matron of the Eastern Star, a leader in the P.T.A., a substitute high school teacher, an organizer of charities, a Jewish woman in the Ladies Aid of two Christian Churches as well as an active member of The Temple and Kol Emeth synagogues; co founder of The Temple couples club, a seminal organizer for progressive, thoughtful community and political leaders; and, with her husband, Harry, one of the founding and continuing members of B'Nai Israel, the first synagogue in Fayette County. She was also renown for her spectacular chicken soup and chicken liver pate. Born of immigrant parents and raised on a farm in Doylestown, Pennsylvania on February 10, 1915 she and Harry moved to Panthersville in rural DeKalb County in 1941 where she quickly established her credentials as a formidable community leader. She held Easter Egg hunts at her home; provided food and clothing for the poor of the community, regardless of race, supported the "Book mobile" traveling library of the Decatur/DeKalb Library and, with all else, found time to teach her children to make good grades, take up music, participate in extracurricular activities, ride a bike, drive a car, make and fly kites, act honorably and treat others with respect and dignity. She and Harry traveled throughout the United States to visit, be with, and renew friendships that started in her and Harry's youth. Her vote in every election was thoughtful, informed and based on honest conviction. As a member of the knitting club at her adult living facility, she made slippers and hats for children and ill people, organized donations for Must Ministries, and gave generously to charities. Her bags of soft drink tabs for the Ronald McDonald House charity created a local legend. It was Martha who decided that since Harry and her children were also born in February, it would be appropriate to celebrate all birthdays with a cherry pie in honor of George Washington, also born in February. Even in her final days she took a brief furlough from the hospital just so that she could share with her great grandson, Harrison, the joy of his Bar Mitzvah. All who knew her loved and respected her gentle manner, her energy, intelligence, patience and strong sense of right and wrong. She was feisty, tough, respected and-most of all-loved by all whose lives were intertwined with hers. She is survived by her daughter, Susan Shields, her nephew Scott Lawhon, her son Donald Weissman and his wife, Dottie, her granddaughter Leslie Rubin and her husband Tod Rubin, all of Marietta, her grandson, Darren Kastin and his wife Bonnie of Chicago and, her great grandchildren Harrison and Jeremy Rubin and Spencer and Elliott Kastin. A memorial service will be held at Kol Emeth Synagogue at 3:30 p.m. on Thursday, March 18, 2010. Donations to your favorite charities would please her.